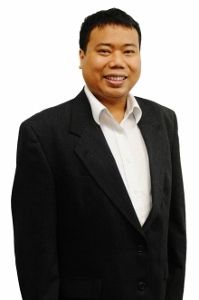 Surya G. Nurzaman is a Senior Lecturer at Monash University Malaysia. He obtained his PhD in 2011 from Osaka University, Japan, with the support of the Monbukagakusho scholarship from the Japanese government. Before joining Monash as a Lecturer in the School of Engineering in 2015, he was a Research Fellow in Osaka University (Japan), ETH Zürich (Switzerland) and University of Cambridge (UK) from 2011 to 2015. Prior to coming to Japan in 2007, he finished his Bachelor and Master degrees in Institute of Technology Bandung (Indonesia), and worked as a software engineering consultant in Accenture for a couple of years, accomplishing various projects in Indonesia, Singapore, Malaysia and United States. His research interests include bio-inspired robotics, soft robotics, dynamical systems, embodied intelligence and morphological computation.

Title: Towards efficient search by autonomous mobile robots in uncertain environments: an investigation of the fundamental biologically inspired principle (2017-2020, at Monash)

An ability to perform efficient search in uncertain environments, i.e. to maximise the probability to find targets of interest with limited and uncertain information, is fundamental in a target search. The ability is even more crucial for autonomous robots due to their limited operational time and sensory capability. Intrigued by animals’ surprising capability to efficiently find foods even in highly uncertain environments, it is indicated that the fundamental principle is the suitability of the search strategies. More specifically, the distribution of their “flight” lengths, i.e. the length of the straight-lines between consecutive changes of orientation, follows certain statistical features depending on the environments. The research focuses on the conception and design of autonomous search strategy based on the aforementioned biological principle.

Soft robots are a new class of machines composed mainly of soft materials, culminated from lessons in biological systems. Compared to their rigid-bodied counterparts, soft robots can move in confined spaces, grasp various objects more easily, and are safer for human-robot interaction. As such, they open up new possibilities in areas of search and rescue, industrial manipulation, and medical/wearable applications. Unfortunately, due to its soft body, it is not easy to develop sensors and know where to place them to sense all relevant states, so that effective control strategies can be applied for optimal performance. From the perspective of dynamical systems, observers can be used to estimate the desired states and detect faults. The goal of this project is to investigate observer theories applicable to soft robots.

Flapping wing micro unmanned aerial vehicles (FWMUAVs) are examples of unstable bio-inspired systems. They have complex flight dynamics and characteristics due to their small size and high frequency dynamics caused by the wing motions. Understanding the flight dynamics and stability of such vehicles is not trivial, which is precisely the goal of this project.

The goal of this project is to develop the prototype of t soft gripper, i.e. grippers made of soft materials, to control it electrically such that it can be further integrate with mobile robot manipulator systems and to analyze the gripper capability. Afterward, the mobile robot manipulator equipped with the soft gripper will be brought to a system demonstration in operational environment, where technology acceptance of the system for elderly care assistance will also be analyzed.

The goal of this project is to develop modular musculoskeletal systems based on cable driven mechanisms. This project is an European Project involving several leading institutions in Europe such as ETH Zurich, University of Cambridge, TU Munchen, University of Bristol and Fraunhofer.

Involved in various soft robotics projects at ETH Zurich, related to the development, locomotion and sensing in bio-inspired soft material robots as an emerging research area in robotics.

Object tracking and grasping in UAV

Investigation of observers in soft robots