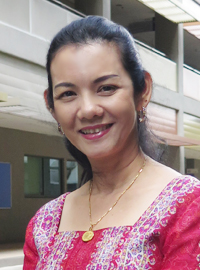 She obtained her PhD from Monash University and for her PhD research project, she explored candidate early predictors for diabetic nephropathy. Her hypothetical candidate early predictor for diabetic nephropathy risk is CYP2E1. In her post-doctoral projects, she developed a targeted proteomic approach to quantitate CYP2E1 from human blood samples and assessed the applicability of this analytical method in clinical practice.

Her research interests are early biomolecules in the development of metabolic syndromes, and drug metabolizing enzymes.

Currently, she teaches Physiology and Pharmacology for the MD and Bachelor of Pharmacy courses.

1997 – Dr Christina was a member of UNU (United Nations University)
Project:  “Environmental Monitoring in the Asian Region”.
Activity for 1997: Detection for Organotins in fish and VOC (Volatile organic compounds) in coastal waters.

1997 – Investigation of Cathinone as compliance studies in Psychotic patients.

1997 – Involved in bioavailability and bioequivalence studies of nifedipine.

Influence of YouTube videos on the learning of tablet-and capsule-formulation by Malaysian pharmacy students: A pilot study. Pharmacy Education, 2015; 15 (1) 248-251.