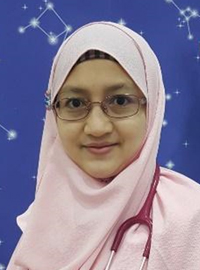 1) Undergone housemanship in Hospital Sultanah Aminah, Johor Bahru from 2001 until 2003.

2) Medical Officer in Pediatric Department in Hospital Sultanah Aminah, Johor Bahru from 2003 until 2004.

Contributed as one of the panel writers in :

1) Revision of Module for 20 Hours Lactation Management Course for HealthStaff, appointed by Ministry of Health.

3) Key Message 1 and Key Message 2 in Malaysian Dietary Guideline for Children and Adolescent 2012 / 2013, Ministry of Health.

Published book and launched in August 2016

(Succesfully breastfeeding without pregnancy) is a book for induced lactation

2) Speaker in seminar in Batu Pahat for general practitioners : Update on asthma management in children on 18th May 2011 organized by MSD Company.

3) Speaker in seminar in Kluang, Johor for general practitioners : Pragmatic approach to constipation in children on 24th June 2011 organized by Abbot Laboratories.

8) Speaker in National Lactation Conference on 14 th September 2013 in One Borneo, Sabah for topic Human Milk for Premature Baby

12) Director and speaker for Seminar “Scoring The Winning Goal in Breastfeeding In Malaysia” on 30 th August 2014 at Dewan Anugerah, KPJ Johor Specialist Hospital.

18) Speaker in MACE (Managing Asthma and COPD Effectively) on topic Asthma in Pediatrics : How to manage, in Johor Bahru on 30th September 2017 organized by Malaysian Thoracic Society.