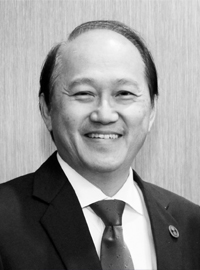 Dr Ho graduated with a medical degree from the University of Malaya in Kuala Lumpur in 1979. He served three years of compulsory government service in the Kuching General Hospital, Limbang Hospital, and Johor Bahru General Hospital. In 1983, he returned to work as a general practitioner in his hometown in Kulai and retired in 2009. During that period, he tutored students from his alma mater  who chose to do short elective posting in general practice. To continue lifelong learning, he joined the Monash University Malaysia as a fractional staff to be a tutor in General Practice in October 2012. He is a Malaysian Institute of Management (MIM) certified professional trainer.

Dr Ho has been recognised for rendering exemplary humanitarian service with an emphasis on personal volunteer efforts and active involvement in helping others by Rotary International with the ‘Service Above Self’ award, Rotary’s highest honour for an individual, in 2009.

Some of Dr Ho’s social humanitarian works include leading the establishment of a big non-profit haemodialysis centre for the poor in Kulai in 1996, promotion of literacy by raising fund to supply new computers and library books for rural schools in Indonesia, northern Thailand, and Johor; as well as his involvement in the water and sanitation projects in Laos, Thailand, and Indonesia. His passion in numerous disaster relief works also saw his involvement in a three-week medical mission during the Chile earthquake disaster in 2009.

Rotary International Service Above Self Award 2009