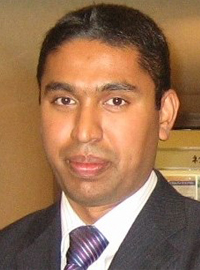 Prof Ezharul Hoque Chowdhury is a professor at Jeffrey Cheah School of Medicine and Health Sciences, Monash University Malaysia, specialising in biomedical science. He completed his Doctor of Engineering at Tokyo Institute of Technology in 2003 under the supervision of Professor Toshihiro Akaike. Subsequently, he worked there as a research fellow and a team leader till the end of 2006 before joining as a tenure-track assistant professor at the same Institute and a visiting assistant professor at Shizuoka Cancer Center Institute. In 2011, he joined Monash University Malaysia as Senior Lecturer and promoted to Associate Professor in 2013.

Prof Ezharul has created a new branch in nanomedicine delivery by developing for the first time pH-sensitive inorganic nanoparticles with fascinating properties which confer notable advantages over the conventional carriers. This is indeed a substantial advancement in the field, considering the limitations of the existing nano-carriers, such as instability in plasma, insufficient release of drugs from the carriers and unwanted side-effects (toxicity). Despite tremendous efforts and heavy investment in the last four decades, due to the lack of an ideal delivery system with appropriate features to overcome those barriers, the world could not see the notable success of this particular field in clinical trials. Based on the highly promising pre-clinical data  obtained in animal models with the smart nano-devices in delivering small molecule anti-cancer drugs, functional genes and selective siRNAs, Prof Ezharul is quite optimistic to see the actual success in clinical trials with his nano-formulations which showed impressive therapeutic efficacy with a drug dose almost 100-fold lower than that traditionally used. The rapid biodegradability of these mineral nanoparticles along with the requirement of pretty low amount of the drugs resulted in no adverse effects usually noticed with traditional nano-formulations. It should be noteworthy that his team has elucidated the mechanism of intracellular delivery of drugs using these particles, and additionally, cellular processing of the particle constituents released after particle dissolution. Additionally, the team has established the technology in delicately controlling the particle diameter for ensuring favourable pharmacokinetics as well as passive targeting of the nanoparticles to selective tissues having leaky vasculature. In order for receptor-mediated (active) targeting, multiple strategies have been designed for surface functionalization of nanoparticles based on electrostatic interactions between the nanoparticles and specific ligands.

So far, Prof Ezharul has achieved 25 research grants as principal investigator (PI) and has published more than 100 original articles in internationally reputed journals in addition to one complete written book. He is one of the inventors of seven US, Japanese and Malaysian patents some of which are already in the pipeline for being commercialized. His research profile can be found in the following websites:

1998-2000: Master of Science in Biochemistry, University of Dhaka, Dhaka, Bangladesh

1993-1998: Bachelor of Science in Biochemistry, University of Dhaka, Dhaka, Bangladesh

In the past four decades, the world witnessed the discovery of liposomes, solid lipid nanoparticles, polymeric nanoparticle and other non-biodegradable nanoparticles as carriers of traditional small molecule drugs and new generation marcromolecular drugs (genes, siRNAs, proteins) to enhance the therapeutic efficacy and reduce the side effects; however, limited successes were noticed so far with regards to the eventual clinical benefits utilizing the existing technology. During the thirteen years of Prof Ezharul’s independent research career, he has fully concentrated to establish a team so as to address the critical issues involved in delivery of the small and large molecule drugs. Although it was so exciting initially to contribute to the field, challenges were subsequently embraced in securing the competitive funding to support his research assistants and post-doctoral fellows as well as to bear the cost of consumable research items and equipment. The pressure for publications was another big challenge particularly for a researcher like Prof Ezharul who intended to focus on a very specific area with much uncertainty of having positive outcomes. Originally driven by an accidental finding while working at Tokyo Institute of technology, he has been able to create a new branch in nanomedicine delivery by developing for the first time pH-sensitive inorganic nanoparticles with fascinating and unique properties which confer notable advantages over the conventional carriers, such as strong electrostatic affinity towards the small and macromolecular drugs, excellent bio-distribution profile and tissue- targetability after intravenous administration of surface-modified, drug-loaded complexes and finally, pH-responsive dissolution of the particles with consequential release of the drugs in the acidic compartments (endosomes), following internalization by the target cells. This is indeed a substantial advancement in the field, considering the limitations of the existing nano-carriers, such as instability in plasma, insufficient release of drugs from the carriers and unwanted side- effects (toxicity).

With a view to translate the research findings into beneficial products for humans, Prof Ezharul and his team are currently focusing on tailoring of their nanotechnology for treatment of cancers, particularly breast carcinoma. They have undertaken a number of strategic projects to predominantly target their nano-carriers to the cancer cells by overcoming the multiple barriers commonly faced after systemic delivery, while discovering alongside novel potential key cellular targets responsible for cancer cell progression and survival.

Chowdhury, E. H. Nanotherapeutics: From Laboratory to Clinic. CRC Press, 2016 (In press).  The most comprehensive, harmonious, illustrative, and up-to-date book on nanotherapeutics or nanomedicine. Link: https://www.crcpress.com/Nanotherapeutics-From-Laboratory-to-Clinic/Chowdhury/9781498707510

2004-2006: Super-efficient DNA/RNA Delivery for Cell-specific Therapy Based on Carbonate Apatite Nano-particles (Japan Society for the Promotion of Science) (JPY: 1,500,000).

Maeirah Ashaie, Perturbation of cell-cell and cell-macromolecule interactions and their associated signalling cascades by biodegradable nanoparticle-assisted delivery of siRNA and study of consequential chemosensitization of breast cancer

Mr. Aiman Ahmad, Title: Controlled release of insulin from insulin-apatite nano-composites for the treatment of diabetes (completed, currently working in Qatar as a medical doctor)

Prof Ezharul Hoque Chowdhury is one of the editorial board members for International Journal of Nanomedicine, Drugs and Therapy Studies, OA cancer, Journal of Cancer Metastasis and Treatment and Journal Recent Patents on Drug Delivery & Formulation.