A leadership in academia seminar

The Department of Psychology hosts two prominent professors from the University of St. Andrews, United Kingdom, to give talks on leadership in academia. 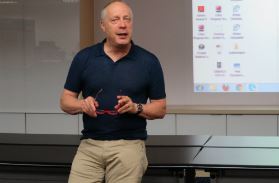 At a recent Psychology Seminar, the Department of Psychology, Jeffrey Cheah School of Medicine and Health Sciences (JCSMHS) hosted two prominent professors from the University of St. Andrews, United Kingdom. Professor Keith Sillar and Professor Stephen Reicher were invited to talk about leadership in  academia and to share their research experiences.

“It’s odd to describe leadership simply by looking at leaders alone,” Prof Reicher said. According to him, one of the principles of leadership is that a leader must be seen as one of us. 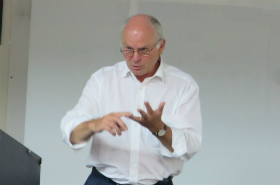 A leader needs to represent the values that make a group distinctive. Prof Reicher, a social psychologist whose work is in the areas of group behaviour and individual-social relationship, also stated that good leadership is about being effective: “What a really good leader does is construct a  sense of us and construct consonants between who they are and what they do. We call them entrepreneurs of identity”.

Prof Sillar, whose main areas of research lie in biological sciences and neuroscience, talked about the practice of trying to gain a group identity and a few key aspects in his career. “Academic leadership is rather like handing on a baton in a relay race. When you accept the baton from your predecessor,  you inherit a set of ideals in that group,” Prof Sillar stated. He also shared a few points on academic leadership:

Leadership is obviously a tool that people use in their relations with each other. It can be seen as about making meaning than about making decisions and influencing people.