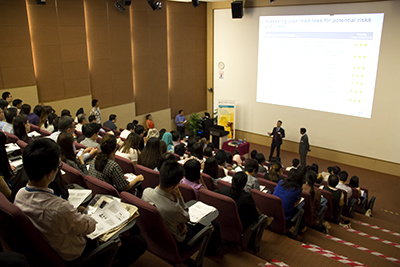 “One of the important things that I have read in recent days, in a few business dailies, is that there is a possibility of a recalibration of the budget next year if the global economic climate necessitates it”, said Professor Jeyapalan Kasipillai, in his opening address.

Dr Singh said that the budget was prepared taking into account the current state of the global economy with oil price hedged at US$45 per barrel. He added that any fluctuation causing a significant drop in oil prices would result in a recalibration of the budget, similar to the one witnessed earlier this year.

“The drop in oil prices necessitated the introduction of GST, last year, to fill the void resulting from the loss of income from petroleum. The revenue from petroleum in 2012 was RM33.9 billion, but it has dropped to RM8.5 billion for 2016 and is projected to record a slight increase to RM10.6 billion in 2017,” said Dr Singh.

He went on to add that the budget was also prepared to continue Malaysia’s commendable rating that was given by credit rating agencies. These companies rate a country based on how manageable their fiscal deficit is. 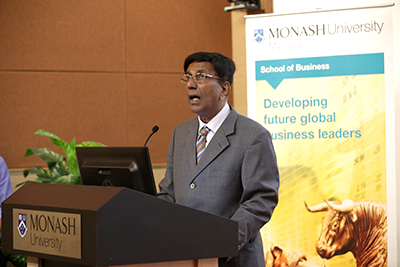 Also, worth noting was the fact that Malaysia dropped significantly in the ranking for paying taxes after the introduction of GST. However, this was due to the time taken by the Inland Revenue Board in the refund and auditing process. Dr Singh said that these problems will be smoothed out in ensuing years, as the implementation of GST is still in its infancy stage.

He expressed concern that almost 40% of the budget is going towards paying civil servants and retired civil servants. “There is something that needs to be done about this”, he said. The amount of civil servants for a country the size of Malaysia is perceived to be disproportionate.

Saravana Kumar later presented participants with case studies related to taxes. He showed arguments and counter arguments in a variety of different cases involving the Inland Revenue Board against alleged tax violators.