Entrepreneurship is not a bad word

Dr Buzz Palmer calls for a change of mindset in universities on the training of future business leaders. 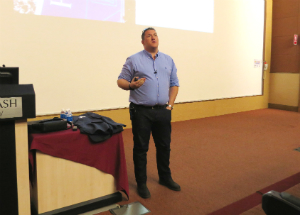 “To infinity and beyond!” This phrase certainly rings true with the mission Dr Buzz Palmer had in mind when he gave a talk on entrepreneurship to staff and students.

Dr Palmer is the CEO of STC Australia and Director of Entrepreneurship at Monash University Australia. He explained how he helps raise capital for startup companies and urged that the trade of entrepreneurship should not be looked on with scepticism and negativity, but rather with ideas and the courage to translate these ideas into real world products or services.

“I am actually a serial entrepreneur. I have 14 startups in medical technology, or medi-tech. My job is one thing, that is to build startups within Monash. That is my only goal,” he said.

He noted the main concept that drives entrepreneurship is the existence of ideas. It is about creating the next generation of technologies, business leaders and industry. He also pointed out that universities are the best place for entrepreneurs to take a grand leap, yet there seems to be a severe lack of what should be.

The role of the universities have changed over the years from mere teaching and research to training and guidance as well. Dr Palmer shared that instead of training students just to excel academically, where they are good with the technical aspects of the trade, the university should be training them in the direction of becoming business leaders too. 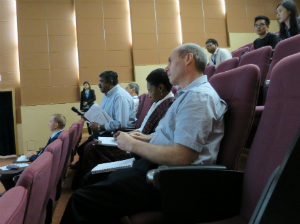 He said this takes developing in them an entrepreneurial mindset and a boldness to take calculated risks in pursuance of ideas.

Using the much celebrated success story of the Monash IVF team in Australia producing the first test tube baby in the world in 1973, Dr Palmer pointed out that some of the innovations of the past were deemed impossible at the time, but those with the idea, did not fear it.

He also provided a brief introduction to some competitions and initiatives being carried out in Monash Australia. These competitions see selected students who have a dream of becoming entrepreneurs being assigned mentors from specific industries, to guide and encourage them.

The talk was an initiative of the Campus Research Management at Monash Malaysia, together with Dr Buzz Palmer.