Helen Jambunathan looks back on her years in Monash Malaysia and says with certainty that her time here was fundamental in shaping her future direction. 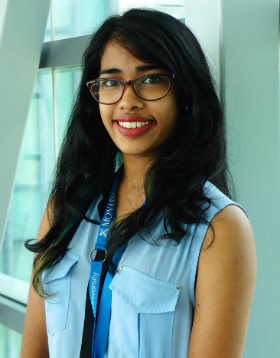 Looking back on my last 6 years at Monash, I find myself hard-pressed to imagine how my time at Monash Malaysia could have been better. In October, I’ll be beginning my Masters degree in Social Anthropology at the University of Cambridge – I’m equal parts excited and nervous, but on the whole I feel fairly well-prepared to adapt.

To a large extent, this next stage in my life and career was made possible by the formative years I spent at Monash. I started university in 2011, opting to do a Writing major at the School of Arts and Social Sciences (SASS). I was pleasantly surprised at the breadth and structure of the Bachelor of Arts course, which allowed me to take electives across fields as diverse as film studies, journalism and gender studies. The critical thinking and social awareness that these years developed in me greatly expanded my personal horizons.

Ultimately, I wound up double-majoring in Writing and International Studies, and later stayed on to do my Honours degree, researching café culture in Kuala Lumpur. As it turned out, Honours year was central to my eventual foray into postgraduate studies because it introduced me to anthropology.

The Honours research experience was invaluable to my successful application for a postgraduate degree. Producing a piece of original research is no easy feat, but it can really take you places. I had to design a proposal, carry out fieldwork, plan multiple interviews, analyse data, and eventually synthesise the results into a coherent paper. We hear a lot about the challenges of conducting independent research, but only first-hand experience exposes you to the reality of the process. It was intensive, enlightening, and developed a lot of competence in me. It has become a cornerstone of my CV because of the conference and publishing opportunities it opened up.

I was fortunate that my time at university doubled up as a CV-building period as well. I was employed as a tutor and research assistant shortly after graduation, which allowed me to cultivate vital skills towards building a career in academia. As a student, I had also been able to accumulate a fairly wide range of work experience, from completing a credited internship at a local civil society organisation, to volunteering at international tennis tournaments, chaperoning study trips around the region, and writing freelance copy for digital and print platforms.

On the whole, the international exposure I had at Monash was second to none. Monash is very much an international university, both the academic material I studied and the campus environment were great launching pads towards becoming a global citizen. I met many people from diverse backgrounds during my time on campus. My student life was also filled with opportunities for travel, mainly through regional faculty study trips and a conference fellowship from the Monash-Warwick Alliance. Most importantly, the university’s reputation meant that my academic results would be recognised by any other institution worldwide – which helped greatly when sending out Masters applications.

When I decided that doing a Masters degree should be my next step, I researched universities and courses I was interested in, sending off applications to about five of them. As it turned out, the application process was much lengthier than I had expected! Having to wait so long was definitely one of the biggest challenges I had to manage along the way. Aside from the lengthy business of producing the relevant documents, I had to gather information on scholarships and deal with the anxious waiting to find out if my applications were successful. In the end, I had to take many scholarship rejections on the chin – the idea was just to cast a wide net and hope that some would come through.

I tried to be careful with my time management during the application process, and later to be patient while waiting for a decision. As it turned out, I was fortunate enough to be accepted to each of the universities I applied to (Oxford, Cambridge, the London School of Economics, Monash, and the University of Sydney), and was offered three different scholarships. I ultimately accepted one of these bursaries to help fund my degree.

Now, at the brink of a different stage of personal and professional growth, I can say with certainty that my time with SASS and Monash was fundamental in shaping my future direction. With the quality of supervision and support I received, I know I can go forward with a solid foundation to build on.