Monash University moves up the rank

Monash University ranks 79th in the world in the 2016 Academics Ranking of World Universities (ARWU) report. 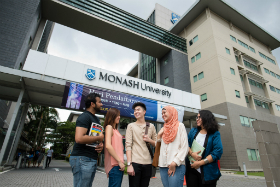 Monash University currently ranks 79th in the world. This welcoming news was produced by the 2016 Academic Ranking of World Universities (ARWU) report.

“Monash University’s increasingly strong international standing is a result of a culture that supports excellence including our long standing commitment to the development and recruitment of world-class talent, sustained investment in long-term research infrastructure, focused international  collaboration for high impact and deep partnerships with industry and governments,” said Monash University President and Vice-Chancellor, Professor Margaret Gardner AO during her acknowledgement of the 2016 ARWU rankings.

Prof Gardner also shared that the current rank reflects the contributions, commitment and quality of Monash staff, measured against the highest international standards: “It is this quality that means we can meet and set the challenges that will benefit our future”.

ARWU has been presenting the world top 500 universities annually since 2003, based on a set of objective indicators and third-party data. ARWU uses six indicators to rank universities, including the number of alumni and staff winning Nobel Prizes and Fields Medals, number of Highly Cited researchers,  number of articles published in the journals of Nature and Science, number of articles indexed in Science Citation Index - Expanded and Social Science Citation Index, and per capita performance.