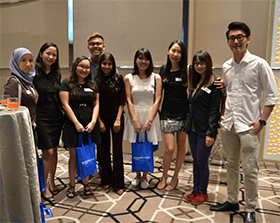 Among professionals of all ages, effective networking is an invaluable asset in the workplace. The inaugural School of Science Alumni Networking Reception, on 20 August 2016, aimed to nurture lasting connections between alumni, staff members, and industry guests. Held in Bangsar South, the cocktail event was the first such gathering across the School of Science, and hosted alumni as far back as 2000.

“The university holds its alumni in high regard,” said Professor Steven Langford, Head of the School of Science, who welcomed guests, and reaffirmed the schools commitment to developing their alumni. “The campus is always keen to engage with our alumni, and is now embarking on a new initiative to encourage alumni to develop their own networks, thus connecting alumni amongst themselves as well as with the staff of the school.”

“Who knows what career opportunities there might be through such networking events. We value our relationship with you, and would like to provide avenues in which we can enrich your careers,” he offered. Prof Langford also mentioned the many “wonderful things” that could be accomplished through alumni networks, including charity fundraising and enhanced learning.

The event also hosted guest-of-honour, Dr Mahaletchumy Arujanan, Executive Director of the Malaysian Biotechnology Information Centre (MABIC). Under Dr Arujanan’s direction, MABIC is about to embark on a new phase of partnership with the School of Science. In her talk, she attributed much of her present career success to the power of networking.

“Networking is one of the most important things for young people with budding careers,” she shared. “It is an asset we create along our journeys, and we never know where it is going to lead us. To all young people here today, never underestimate the power of networking and building contacts. I am where I am today because of it.” 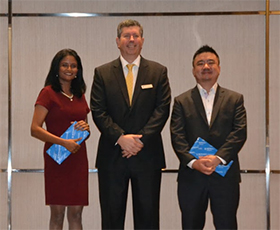 Besides emphasising the value of relationship building, Dr Arujanan also stressed the importance of developing “transferrable skills” that can be adapted to any work context. “There are excellent opportunities out there,” she told graduates, “but you really need to network, and the transferrable skills to apply what you have studied in your lab or classroom, to something that might initially be unrelated.”

Many alumni in attendance welcomed the opportunity to mingle with their peers, reconnect with former lecturers, and meet new people. The reception illuminated their diverse, yet equally successful career trajectories.

Jason Khoo, who enrolled in the School of Science in 1999, has progressed through many career phases since graduation. Initially working at a private medical centre, he eventually landed a job in Singapore (thanks to a recommendation from a Monash lecturer) and now conducts research at an international pharmaceutical corporation. He recalled his time at university with great fondness, especially how well it prepared him for the transition to working life.

“Personally, I enjoyed my time in Monash,” he said. “Looking back, the past fifteen years since graduation have been interesting. The knowledge and experience gained during my undergraduate years at Monash provided a strong foundation on which I built my professional career.”

“Similarly, most of my batchmates are still involved in the life sciences or are in academia in one way or the other. Many have successful careers in Malaysia, while others have established themselves in Australia, Singapore, Indonesia, and the United States, with diverse careers in environmental management consultancy, research, and sales and marketing. Though most of us are spread geographically, we keep in touch.” 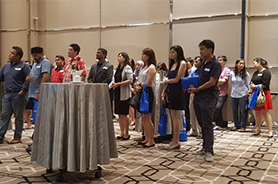 Instead of jumping into the workforce, there are also other alumni who elected to pursue postgraduate studies in related fields. Christina Injan, a former biotechnology major, conducted food research during her Honours year and is now undertaking a PhD at Monash. “Doing Honours, I discovered an interest in research. When a scholarship opportunity presented itself, I decided to continue my career in research,” the microbiology PhD student shared.

Dato’ Lawrence Low, who graduated with a major in biotechnology, enthused that networking events like this are not only a chance to look back on the past, but also offer key opportunities towards building a better future.

“It’s been great catching up with staff members who are still around,” he said. “We should make more friends tonight – we’re a family. Everybody should look forward to see what we can do together.”

All in all, the networking reception was a great success, and a sense of warm camaraderie lingered throughout the evening. “I’m sure with the success of this event the school will organise more,” said Dr Arujanan, “and maybe even make it an annual affair.”