Professor Maude Phipps delivers a talk during the Evolgenome seminar series held in Stanford University, US. 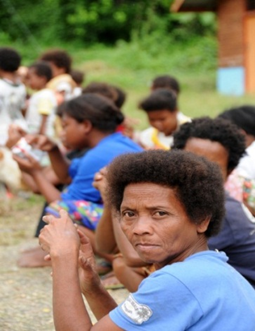 Professor Dr Maude Phipps, Professor of Human Molecular Genetics at the Jeffrey Cheah School of Medicine and Health Sciences (JCSMHS), was invited by the Stanford Center for Computational, Evolutionary and Human Genomics (CEHG), in the US, to deliver a talk on the indigenous communities of Malaysia, their genetic history and health.

There is wisdom in the indigenous’ simple ways and Prof Phipps began her talk by sharing a quote from Chief Oren Lyons, Onandaga Nation: “Although we are in different boats, you in your boat and we in our canoe, we share the same river of life”.

Of the 869 OA (Original Peoples) communities scattered throughout Malaysia, 37.2% are in interior rainforest areas; 61.4% are in forest-fringe and rural areas and only 1.4% are in or close to urban centres.

According to Prof Phipps, the indigenous populations (OA) of Peninsular Malaysia are divided into three major communities or tribes, namely the Negrito, Senoi and Proto-Malay as large collectives. The tribes are different in terms of linguistics, physical appearance, societal structure and habitat, and cultural practices and belief. Despite the huge morphological, anthropological and linguistic diversity, the genetic structure of these populations remain obscure.

She added that with the exception of India, all Asian populations form a monopyletic clade, which consists of an ancestral species and all its descendants. This findings suggest a single entry of modern humans into Southeast and East Asia, rather than the theories of multiple entries in the past.

The continuum in divergence time from Negritos to Senoi and Proto-Malay in combination with ancestral markers provides evidences of multiple waves of migration into SEA starting with the first Out-of-Africa dispersals followed by Early-train and subsequent Austronesian expansions.

Prof Phipps concluded her talk by stating the variable prevalence of obesity, cholesterol, hypertension and diabetes in OA as side effects of socio-demographic change and urbanisation.