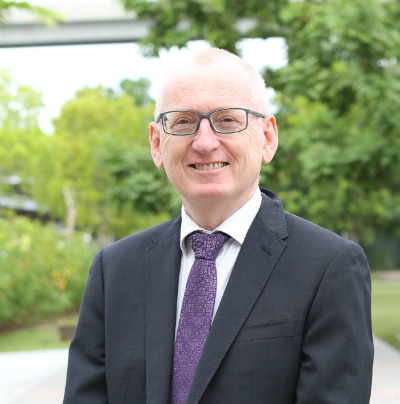 An anthropologist specialising in the society of culture of Southeast Asia, moving to Monash Malaysia is an opportunity to combine his two passions – Southeast Asia and education leadership.  Over the past 25 years he has been a regular visitor to the region, conducting research on cross-border trade, environmental management and rural development. He is currently writing a book about a rebellion that took place in the borderlands of Burma and Siam in the early nineteenth century.

Professor Walker has a strong interest in higher education leadership. He has served as a member of the Executive Committee of the College of Asia and the Pacific at the ANU from 2009-2014; and was the Deputy Chair of the ANU University Education Committee from 2013 to 2014, pursuing a wide range of education reforms. Prior to his academic career, Professor Walker worked in Australian government agencies, at both Commonwealth and State levels.

With a focus on educational innovation, Professor Walker has been exploring how new technology, and new forms of media, can transform the ways academic share knowledge and promote learning. He is also committed to the importance of learning outside the classroom. Over the last two years, he has led study tours to Myanmar, providing undergraduates with first-hand experience of that country’s rapid social, economic and political transformation. During the most recent study tour, students’ experiences ranged from planting rice with farmers to discussions on national development challenges with the Myanmar Minister of Agriculture.

Professor Walker graduated from the University of Sydney with a Bachelor of Arts (Hons) and later pursued a PhD at the ANU.

Outside of work, Professor Walker enjoys photography, music and reading.