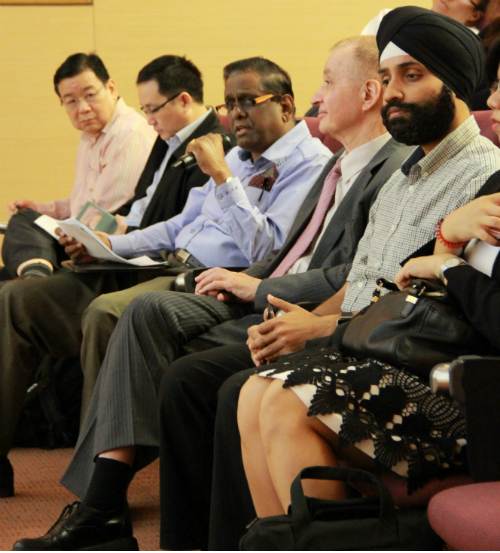 The last budget before the 14th General Election that was tabled by Prime Minister Datuk Seri Najib Abdul Razak had generated plenty of discussions.

A panel of experts assembled, for the Monash 2018 Management Budget Seminar, to separate the wheat from the chaff.

Professor Jeyapalan paid a glowing tribute to Monash University Malaysia after it achieved the  Outstanding (6-Star) university status in the latest Malaysia Rating for University and University College Excellence SETARA-2017, conducted by the Ministry of Higher Education, Malaysia (MOHE).

“One good announcement today is about a joyous event for Monash Malaysia. This is because we achieved a milestone by getting the Setara 6 status, and we’re proud to be one of the two private institutions of higher learning to have been awarded this,” he said, to a round of applause from the guests.

Dr Singh started off with a brief insight into the mechanics behind the creation of the budget and the myriad of factors that is at play when it comes to the fiscal planning for a nation.

“When the government looks at designing the budget, there are a number of things they consider, and if you read the budget speech, there is always reference to the global economy, because we are an international economy.

“Malaysia is one of the countries in the world that is heavily dependant on oil. The government hedged the global price of crude oil at US$55, although the price right now is US$61-US$62,” he said.

He added that the prices of petrol might increase even more next year, explaining why fuel pump prices have been on the rise recently.

“However, from the country’s point of view, if the crude oil prices go up, Malaysia gains, because we have petroleum income tax and taxes on crude oil exploration. These contribute to the income of the nation,” said Dr Singh.

He then went on to talk about the challenges Malaysia faces as it prepares for Industrial Revolution 4.0.

“We have a slow pace of technology adoption and aren’t really into automation yet. That explains why the government is trying to give incentives such as tax depreciation allowances to spur growth in these areas.

“On the flipside, if you pursue automation aggressively, you also lose jobs, so what do you do with that?” he asked.

Dr Singh also accentuated the importance of fiscal discipline, and how this affects the credit rating. Ratings from agencies like Standard and Poor’s and Moody’s, just to name a few, play an important role in the issuance of bonds and funds.

Jalbir Singh Riar lamented the lack of clarity that normally accompanies the budget and posed a few questions for the Customs Department and the Ministry of Domestic Trade, Co-operatives and Consumerism (KPDNKK).

“Reading materials like newspapers are zero-rated meaning if you buy it from the shop there will be no GST charges. However, magazines and journals are subject to a GST of 6%. Moving forward it is proposed that from January 2018, all types of books and magazines will be zero-rated. The question I have is, what about online reading materials, will they be also subject to zero-percent GST? ” he asked.

He also questioned if the prices of magazines right now are inclusive of GST, and if they are zero-rated, will that mean a reduction in the prices.

“What we have seen is that whenever an item is zero-rated, the prices remain the same, so is this beneficial?

“We have written to the Customs Department and KPDNKK to have the reductions published in newspapers, in the form of before-and-after prices,” he explained.

Saravana Kumar briefly spoke about the crackdown that has been launched by the government on tax evasion. He also enlightened business representatives about their rights in the event they face legal action.

He went on to share some real-life scenarios involving the Inland Revenue Board against alleged tax violators.

The session concluded with a question-and-answer session.