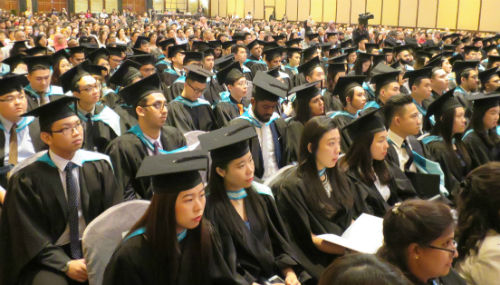 It was a momentous occasion for some 600 students who received their scrolls during Monash University Malaysia’s graduation ceremony on 11 November 2017.

Opening the ceremony was Dr Christine Nixon, APM, Deputy Chancellor (Presiding), who congratulated graduates, adding that “this moment marks an important milestone in your lives”.

“This ceremony is a visible culmination of your hard work and commitment. Your achievements are outstanding, and you should always look back at this moment with a great deal of pride.”

Dr Nixon reminded graduates that as fellow alumni, they are “joined to the university and each other by a link that cannot be broken” and urged them to keep in contact with their relevant alumni groups, regardless of where their future takes them.

Next, in his address, Professor Abid Khan, Deputy Vice-Chancellor and Vice-President (Global Engagement) expressed hope that graduates will forge values that Monash holds dear, and nurture the love of discovery that is expressed in the university’s motto, Ancora Imparo, which translates as “I am still learning” or “I am still discovering”.

Meanwhile, Professor Andrew Walker, President and Pro Vice-Chancellor, Monash University Malaysia said the ceremony, which saw many local and international students from various countries graduating, was a testament to Monash’s success and of the university’s potential for better things in the future.

The anthropologist also presented the Monash University Malaysia’s 2017 Distinguished Alumni Award to Tricia Yeoh, a Fellow of the Institute of Democracy and Economic Affairs (IDEAS) during first graduation session.

“We are pleased to honour Yeoh with the 2017 Distinguished Alumni Award. This is the first time we’ve had one of our own Monash Malaysia graduate speak at a graduation ceremony. That’s also a sign of the maturity of Monash Malaysia as an international campus,” he said, adding that they are proud to honour Yeoh’s contribution to civil society in Malaysia.

“It’s important for universities to contribute to civil society and she’s a real symbol of that contribution.”

During her speech, Yeoh highlighted brewing issues in the country and the effects of politics in our daily lives.

Yeoh who is also a columnist with The Sun urged graduates to remember three vital things: that no matter which path they choose, it will always be impacted by politics and the “bigger decisions being made”; secondly, for graduates to constantly remind themselves that their time in university is not the end point of their learning, and of the importance of seeking new experiences and knowledge; and thirdly, that ordinary people can do extraordinary things. 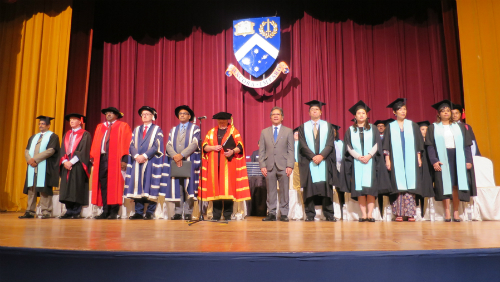 In the afternoon session, guest speaker Dato’ Sri Idris Jala, Co-chairman, Sunway Group also shared some advice and nuggets of wisdom in his speech which have worked for him throughout his life and career with guests, which was woven with humour.

His first advice to graduates came from his late father who told him, “If you want to be number one, you must be kiasu.”

Kiasu is a Hokkien word for ‘afraid to lose’.

“If you want to be kiasu in whatever you intend to do after this, or to be kiasu in your profession, (you need to) find out who is currently number one and be his or her best friend,” he said.

“Find out exactly why the person is number one, how the person does it, what exactly does the person do. You can do all of that, but do more of it. And do it until you beat the person- that’s what it is.”

He added that graduates should also dream big to fulfil their potential, without being hindered by their fear of failure.

“If you commit yourself to do what you think you cannot do, and strive to do it, I won’t guarantee that you would succeed, but I guarantee you one thing - you will achieve your full potential,” he said.

Jala, who was listed as one of the 10 most influential policy makers in the world in 2014 by Bloomberg Markets magazine, also encouraged graduates to find their “why” when starting something, and not begin the question with “how” or “what” as it is the most powerful question.

He also reminded graduates about the importance of being the last to speak upon becoming a leader in organisations, and to learn to listen and get feedback from others to enrich themselves.

“If you don’t remember (all) the things I talked about, and if you only want to remember one (thing), I ask you to remember what my father said - be kiasu.”

Congratulations again to all graduates!