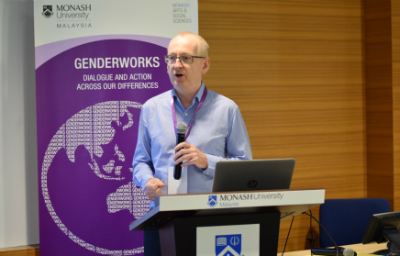 It was also organised in partnership with private institutions that form the Gender Equality Initiative, set up by the Association of Women Lawyers and the Bar Council, Malaysia. The initiative comprises INTI International University, University of Nottingham Malaysia Campus, Brickfields Asia College, Advance Tertiary College, and Monash University Malaysia. Revolving around the theme of Gender Studies, the conference called for papers by undergraduates that tackled issues pertaining to how gender manifests itself in our everyday lives, which includes, but is not limited to, the law and human rights, culture and religion, as well as in texts such as films.

Launched by the President and Pro Vice-Chancellor (interim) of Monash University Malaysia, Professor Andrew Walker commended the team on the strategic partnerships forged through the organisation of this conference. He also liked the multi-layered interpretations of the conference theme, believing that Genderworks has at least two meanings, with the first being that “gender, as we know, is a work in progress, for all of us”. Throughout our lives, we grapple with our own particular style and form of gender which is not, of course, left untouched by social, political, cultural and economic forces, hence highlighting the malleability of our identities.

The second meaning Professor Walker identified is that while we have “gender diverse societies, we certainly don’t have gender equality”. As such, we have to keep working to achieve gender equality. 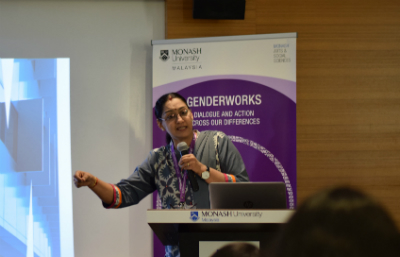 Following his speech was keynote speaker Dr Shanthi Thambiah’s, who went on to echo the need to keep working to achieve “equality for diversity” and stressed the importance of conferences such as this, despite, and because of, widespread beliefs that feminism is no longer necessary because, in reality, there is still much to be done.

Thematic panels of the sixteen papers selected pre-conference include Gender, Technology and Film; Gender, Capitalism and Labour; Gender, Equality and Justice: History and Institutions and finally, Gender, Equality and Justice: Relationships and Values. The authors of these papers, who come from three different institutions, INTI International University, University of Nottingham Malaysia Campus, and Monash University Malaysia, were each given 10 minutes to present their findings, followed by a Q&A session. Among those present was Sheena Gurbakhash, from the Association of Women Lawyers, who served as a judge for the best oral presenter. The honour was jointly presented to Agnes Ong and Elizabeth Eu from Monash University Malaysia INTI International University respectively.

But the paper that topped all sixteen came from Communication major Chelsea Teoh, who is currently pursuing a Bachelor of Arts and Social Sciences at Monash University Malaysia. Teoh, who wrote about simulated relationships and the Cyborg-Otaku, articulated that her paper was inspired by her personal interest in Japanese pop culture and video games. She explained that she thought it would be interesting to explore the video gamer who is usually seen through a communications lens as a product of digital/mobile media, and with gender as a main analytical lens, as a hybrid body.

Teoh added that this conference served as a platform to showcase that gender permeates all spheres of life, and “draws attention to the aspects that we take for granted because they are so deeply entrenched in the way we live that we are not even aware of it”. Indeed, one aim of Genderworks was to open eyes to how genders and sexualities operate in our everyday lives and, more academically, across different disciplines such as law, global studies, film studies, and, of course, gender and sexuality studies. 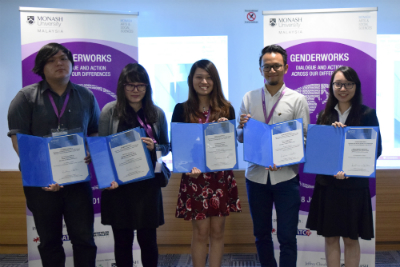 Kan Wai Min, who was one of the Top 5 best paper award recipient, shared that he also liked that Genderworks challenged the status quo and provided a platform to “tackle issues that are not always or openly discussed” which he deems important to “protect and promote social justice for all”. Issues such as sex, gender, sexual orientation, religious affiliation, and socio-cultural contexts, differences that seem irreconcilable, were constantly highlighted during the conference. But instead of ignoring or excluding them, which happens more often than not, Genderworks 2017 accepted, acknowledged, and privileged this diversity.

Finally, while this conference also provided an intellectual and safe space for young minds like Teoh’s and Kan’s to critically and reflexively consider the ways in which gender works in their lives and the institutions they inhabit, it also had an effect on those of us who are not entirely new to this field. For us, Genderworks 2017 served as a reminder to keep going, no matter how long we have been at it, no matter how far we have come and no matter how far we still have to go. To quote Dr Alicia Izharuddin, a lecturer in Gender Studies at the University of Malaya, who was addressing the aspiring undergraduates who were not sure if their papers would change the world, Gender Studies was started to change the world—and that is what we will continue doing, one tiny step—or one paper—at a time.