A Roundtable on the Rohingya in Malaysia They fled their home country in the hopes of finding a better future for themselves and their children. Malaysia has become home to thousands of Rohingya refugees. It has also become one of the few countries leading the effort to bring awareness to the Rohingya crisis on an international level.

On 6 March 2018, a Roundtable on the Rohingya in Malaysia was held to discuss the rights of Rohingya and other refugees in the country. Head of School of Arts and Social Sciences, Professor Helen Nesadurai welcomed the guests and everyone present by stating how glad the School was to be able to play a small role in hosting the roundtable. She also hoped that a practical and fruitful policy concerning the refugees could be achieved through this forum.

Richard Towle, Representative for the United Nations High Commissioner for Refugees (UNHCR) gave an overview of refugees in Malaysia and lessons to be learned from abroad. He also stated that given its geography, Malaysia has been a place of sanctuary for refugees for many years: “Initially, it was a country of transit for refugees, as most refugees were set up in countries such as Australia and the US. The Rohingya seem to see Malaysia as a place of destination, not transit. The paradigm that implies they come here as a place of transit doesn’t apply to them.  Are there threats to refugees being here or are they being blown out of proportion?”

As of end January 2018, there are some 153,480 refugees and asylum-seekers registered with United Nations High Commissioner for Refugees (UNHCR) in Malaysia, 67,300 of whom were Rohingya. According to MERCY Malaysia President, Dato’ Dr Ahmad Faizal Mohd Perdaus, there is an estimate that suggests tens of thousands of Rohingya refugees who still remain unregistered. Registered or not, they face the same predicament - limited access to basic needs such as shelter, healthcare services, and education. Access to public health care is available only for UNHCR document holders, but at a very high cost. Since refugees in Malaysia do not have the right to work, the cost for healthcare becomes unaffordable.

“Malaysia is not a signatory to the 1951 Refugee Convention or its 1967 Protocol, nor is there a legal framework to manage these persons of concern. Most of the 371 Rohingya who disembarked in Malaysia during the May 2015 boat crisis, spent more than a year in the Belantik Immigration Detention Center (IDC) in northern Malaysia,” shared Dr Ahmad Faizal.

With very limited or no access to formal education, these refugees’ only options are limited to unaccredited voluntary learning centres run by other Rohingya and sympathetic Malaysians. Though there is a large migrant labour sector in Malaysia that provides work opportunities for the Rohingya, those opportunities are usually short-term. The informal nature of the work also leaves them vulnerable to exploitation, aside from increased risk of arrest and detention  by the authorities.

A few action plans were discussed during the roundtable. A multi-stakeholder task force with a mandate to issue recommendations to the government should be created to be responsible for initiating relevant studies, reaching out to the different stakeholders. The element of protection and provision of rights to the Rohingyas should be central in the recommendations, and the process should be gradual. 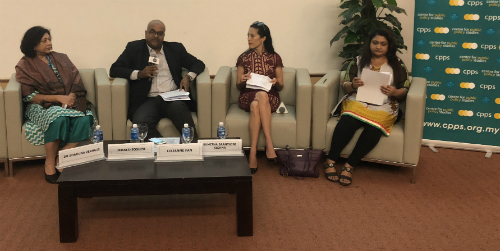 A second plan of action should be enabling legal status. This could potentially provide various benefits to the government from taxes collected from legal employment of refugees to curbing corruption and illegal trafficking. There is no requirement for Malaysia to be ratified by the 1951 refugee convention, as other countries such as Jordan, Indonesia, and Iran have successfully managed refugees without it. Among other action plans discussed were to either establish or improve health education modules, public health care clinics, vaccination programs and detailed assessment on the health status among refugees, to ensure that diseases are not spread and preventive measures can be taken up.

Sharifah Shakirah, Co-founder and Director, Rohingya Women Development Network spoke on her experiences working with refugees in Malaysia. While sharing some heartfelt stories on the refugees here, Sharifah stated that nothing has changed over a span of 20 years and that the refugees have been victimised by many parties.

A panel of experts: Jerald Joseph, Commissioner with the Human Rights Commission of Malaysia (SUHAKAM); Dr Sharuna Verghis, public health researcher, educator and activist; Sumitha Saanthini Kishna, advocate and solicitor and the sole proprietor of Chambers of Sumitha, made up the panel for discussion, moderated by Lilianne Fan, International Director and Co-Founder of Geutanyoe Foundation. The discussion was dynamic, with each panel member discussing and trying to find gaps in the approach towards the Rohingya refugees.

Organised by the Centre for Public Policy Studies (CPPS) and Asylum Access Malaysia, the roundtable served as a platform to discuss practical and sustainable solutions in law and policy to this crisis in Malaysia. It also discussed the limitations and opportunities within current international refugee policy concerning long term support for refugees.