Playing a critical role in development 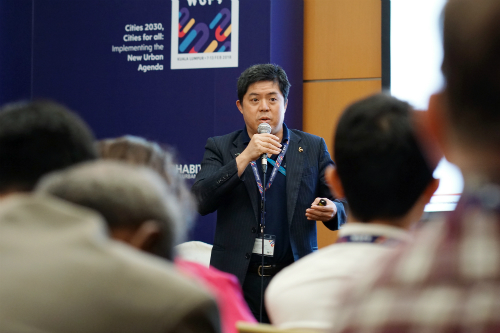 Sharing the powerful tale of Sunway City’s meteoric rise from a wasteland to a thriving township were staff from Monash University Malaysia, Sunway University and the Jeffrey Sachs Centre at the ninth gathering of the World Urban Forum in Kuala Lumpur during a networking session titled “Sunway City - Wasteland to Wonderland (ST3: Climate Responsive Cities)”.

Sunway Group Head of Sustainability Task Force Cheng Jew Keng took the audience through the transformation of Sunway City, which started out as a tin mining wasteland in the 80s to become a vibrant community and its aspiration to become a role model of sustainability for other townships in the country.

Through the leadership of Tan Sri Dato’ Seri Dr Jeffrey Cheah, Founder and Chairman, Sunway Group, Sunway City rose from the depths of a mining crater to a thriving ecosystem that hosts a vibrant township. The township is a major attraction for local and foreigners, as a residential place and resort haven. The city hosts some of the best – retail outlets, educational institutions, theme park, hotels, medical care facilities, offices, and childcare centres.

Cheng highlighted that 25,000 trees have been planted to date, and over time over 150 species of flora and fauna have blossomed in the township as it transformed from a barren wasteland. “We have put in a lot of effort to ensure all our business units’ operations are aligned with the 17 UN SDGs (the United Nation’s sustainable development goals),” said Cheng, adding that the group has won several accolades, including being named as the green township of Malaysia and recognised with the Low Carbon City award by the Malaysian Institute of Planners.

While Sunway City has grown by leaps and bounds in the past 30 years, the Group is still taking steps to improve the sustainability of its township by engaging the help of researchers from Monash University Malaysia. Three Monash University Malaysia projects related to managing traffic congestion and environment pollution; sustainable river management; and energy sustainability within the Sunway City were showcased at the forum. Tan explained that traffic congestion has a wide range of adverse consequences, including air pollution which can cause a host of health problems among individuals, such as respiratory disease, auditory impairment in addition to the visible increase in traffic-related accidents.

“Monash University has recently started working with the Sunway Group on looking at how the traffic situation can be improved in Sunway City itself,” he said, adding that he co-leads the project titled Sustainable Integrated Traffic Ecosystem (SITE).

“One approach that we are going to take in our work is to see how we can propose methods to integrate or modify these modes of transport to ease congestion. Given the complexity of the problem, we have adopted a multidisciplinary approach to tackle these problems,” he explained, adding that the project team comprises of people from various schools in Monash, including Engineering, Business, IT and Medicine.

Ultimately as a consequence of this research, Tan said, “At the top line we would like to reduce congestion, which will help reduce pollution and lead to healthier lifestyles in the city and increase the attractiveness of Sunway City as a place to live and work in. We hope the results will increase the capacity of Sunway City in handling more traffic and more people, so there can be greater economic development. These outcomes clearly align with several SDGs.”

The civil engineer, whose expertise lies in water management, is working on a 48-month long project with a team at Monash on improving a canal that runs through the township so that it not only functions as a smart and sustainable river, but will also benefit Sunway City’s community.

Dr Daniel Kong, an engineering lecturer at Monash University Malaysia, introduced the innovative work that he is doing with the Sunway Group on solar pavers during the second session titled “Sunway City: Powering Sustainable Energy”.

Kong works with an assortment of people, including those from Monash and Sunway Building Materials, to develop solar pavers. While solar panels are usually placed on roofs, he explained that their idea was to incorporate some of these technologies within roads, with the hope of replacing some of the traditional means of generating electricity.

“We’re not saying that this is going to power an entire building, but we’re starting off small for now,” he said, citing examples such as street lamps.

Professor Pervaiz Ahmed, who moderated the session noted that the key underpinning of the showcased projects is the multidisciplinary teams that bring diverse perspectives and expertise to tackle complex issues using sound scientific and behavioral methods. He went on to emphasise that in order to ensure greater acceptability and economic sustainability of these initiatives, scientific solutions must take in to account human and economic considerations.

Professor Pervaiz Ahmed ended by stating “The ultimate key to prosperity and success begins with and ends with people. It begins at the top with Tan Sri Dato Seri Dr Jeffrey Cheah’s philosophical vibrancy. His encompassing vision of the future is the engine of all vibrancies, infrastructural vibrancy, economic vibrancy, social vibrancy and ecological vibrancy. It ends with the well-being and prosperity of the Sunway community (residents, working professionals, students, the young, the elderly) whose experiences, actions and activities define the success of the Sunway City.” Professor Mahendhiran Nair, Vice-President (R&D) from Monash University Malaysia, who moderated the second session on energy efficiency projects at Sunway City summarised that sustainability of any initiative required strong and visionary leadership that takes a strategic approach to understand and nurture the blueprints of the ecosystem that exists within it.

In the case of the Sunway City ecosystem, Tan Sri Dato Seri Dr, Jeffrey Cheah provided the strategic leadership to develop the blueprints (7is) of the ecosystem, which entail the following:

Mahendhiran contends that the example from the Sunway case study provides valuable insights for other townships that aspire to build a vibrant, prosperous and sustainable ecosystem.