Women entrepreneurs to the fore While many harbour dreams of running their own businesses someday, few possess the tenacity and passion required to realise these ambitions and achieve success.

Among those who have successfully carved a name for themselves in the Malaysian entrepreneurial scene is Christina Ng, founder of local shoe label ChristyNg.

Speaking at the recent On The Edge Talks held at Monash University Malaysia, Ng said she had always wanted to design shoes for a living but her parents would not allow her to pursue the course of her choice.

“I had a strict upbringing, with my father placing a lot of emphasis on education since he grew up as an orphan. I ended up picking biotechnology as it was the shortest university course I could find at the time,” she said at the talk, themed, ‘Empowerment of Women Entrepreneurs in the 21st century’.

Today, Ng has sold more than 30,000 pairs of custom-made shoes to more than 30 different countries and has close to 1 million followers on social media.  Launching her first brick and mortar outlet in 1 Utama Shopping Centre, Ng is set to open her sixth store in MidValley Megamall this year.

It was not always a bed of roses for Ng, who had her fair share of challenges as an entrepreneur.

“As a woman in her 30s who wants to make money, people start questioning my personal life. Somehow there is this double standard – you don’t face this problem when you’re a man. As a woman entrepreneur, you have to be good at ignoring the critics!” Ng said with a laugh. 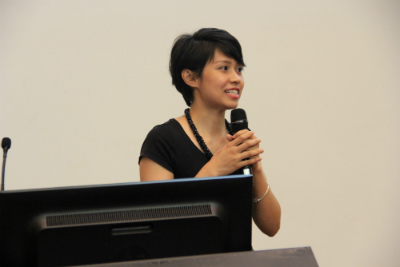 For Wong Xiao Cheng, head of business at Earth Heir, being a female entrepreneur proved to be advantageous, as she works primarily with women craftsmen in her line of work.

“Of course there is the downside [to being a woman], where people may not take you seriously but that barrier can be easily overcome so long as you can prove your worth,” said Wong, who left a promising career in management consulting to co-found Earth Heir.

Currently, Earth Heir works with around 100 artisans from the Orang Asli tribes across Malaysia to provide them with opportunities to earn a sustainable income through their handcrafted products.

“Local artisans are being exploited because people are not paying for the true value of the product. We talk to the artisans to understand their stories and how their products work to determine how much is fair wage for them,” explained Ng.

Dealing with failure and competition

Failures are to be expected as an entrepreneur, said Ng. “Don’t be too overwhelmed by failure. Every dog has its day. Success is not permanent so we need to keep pushing – both success and failure are not permanent,” she said.

During the initial start-up years, Ng was unable to retain talent when a group of five employees left her for better remuneration elsewhere. “Dreams don’t last when there is no money on the table. It was then that I realised that I did not scale the business fast enough,” said Ng.

For Earth Heir, failure comes in many forms – artisans refusing to work with the company and misconceptions about local crafts, to name a few. Competition in the form of cheaper handicraft goods is another challenge.

“We have not reached a point where craftsmanship is deemed valuable. At bazaars, we have people scolding us for our selling local products at our prices,” said Wong.

“But what differentiates us is branding. We take the long-term sustainable approach. We tell the artisans’ stories. We will innovate and produce what customers want according to the quality our brand promises,” said Wong.

Competition is not to be feared but welcomed instead, Ng added.  “Our store in One Utama is next to a major local label but they are both top performing shoe stores. Competition validates what we do,” she said. To differentiate ChristyNg from other shoe labels, Ng said they focus on their niche in custom-made shoes, branding and customer service.

“Train your staff to be better than the competition by teaching them selling skills. If the customer feels good, she will spend more. Good service gives us influence,” Ng said.

What it takes to be an entrepreneur

Being an entrepreneur requires more than just book smarts – one needs to possess the right attitude and character, Ng said.

“Do we depend on others to teach us how to get things done? As an entrepreneur, you learn everything yourself. You need to be inquisitive, thick-skinned and resourceful so that you are able to take rejection, no salary and know how to sustain yourself through funding. It is not glamorous – you have to get your hands dirty,” said Ng.

Ng’s advice to budding entrepreneurs is to intern at as many start-ups as possible, so that they will be able to learn.

Entrepreneurs also need to have good interpersonal skills as they will have to deal with many people in their line of work, said Wong.

“If there is one thing I learnt today is that attitude is very important, along with strength of character and dedication. Opportunity is always knocking at the door but you’ll find failure always one step behind you,” said Professor Pervaiz Ahmad, Director of Entrepreneurship and Innovation Hub (eiHub) at the School of Business in Monash University Malaysia.