Nuclear weapons pose the greatest acute and existential danger to humanity. Yet, rather than disarming, all nuclear-armed states are massively investing in modernising their arsenals. The danger of nuclear war is growing. Nuclear winter and nuclear famine following a nuclear war would be worldwide and catastrophic. The only cure is prevention.

The historic United Nations Treaty on the Prohibition of Nuclear Weapons was adopted on 7 July 2017. It is a planetary health good of the highest order, recognised in the award of the 2017 Nobel Peace Prize to the Australian-born International Campaign to Abolish Nuclear Weapons (ICAN). Dr Ruff will elaborate on how the Treaty provides the only currently defined path to the eradication of nuclear weapons and why all states should urgently join and implement it. 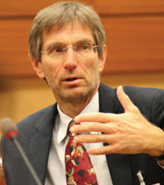 Dr Ruff is co-president of International Physicians for the Prevention of Nuclear War (Nobel Peace Prize 1985); and co-founder and founding chair of ICAN, awarded the Nobel Peace Prize in 2017 ‘for its work to draw attention to the catastrophic humanitarian consequences of any use of nuclear weapons and for its ground-breaking efforts to achieve a treaty-based prohibition of such weapons’. Dr Ruff was the inaugural head of travel medicine at Fairfield Hospital and then Royal Melbourne Hospital. He currently serves on the World Health Organization’s Western Pacific Hepatitis B Expert Resource Panel.