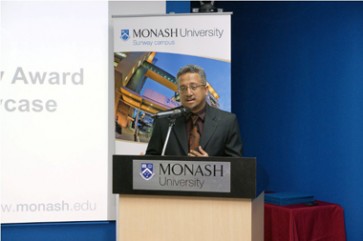 Lui Mei Yi could not believe her ears when she received the phone call telling her she was a successful recipient of a RM10,000 grant from Pfizer (Malaysia) Sdn Bhd.

“I was, like, ‘what?’ I was wondering whether I would get it. I am so happy!” exclaimed the excited Year One Pharmacy student.

“The award makes me proud, that I could actually make it and ease my parents’ burden a little,” Mei Yi said, adding her thanks to the Jeffrey Cheah School of Medicine and Health Sciences and Pfizer (Malaysia) for the gift.

Mei Yi was among Pharmacy students who collectively received RM30,000 worth of grants. Stanley Teng Yang Yang and Ku Chai Yee, also first-year students, and second-year Vincent Wong Yan Wei and third-year Lee Fei Yee, were the successful grant recipients. Since 1984, Pfizer (Malaysia) has been recognising local graduates with academic excellence as part of its commitment to education and innovation in science. 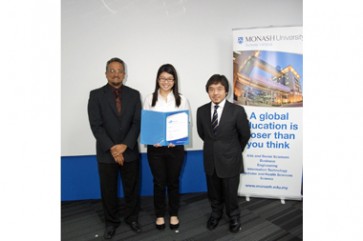 “This educational grant to Monash University Pharmacy Program is in line with Pfizer’s tagline of Working Together For A Healthier World where we strive to set the standard for quality, safety and value of medicines to improve the health and well-being of Malaysians at every stage of life,” Dr Vicknesh Welluppillai, Pfizer (Malaysia) Sdn Bhd Medical Director said.

Alongside the collaboration with Pfizer, the Jeffrey Cheah School of Medicine and Health Sciences launched the Virtual Practice Environment (VPE) in Malaysia.

Head of School Professor Dato’ Dr Anuar Zaini bin Md Zain in his address said that partnerships with the local pharmaceutical industry was important for students to have a seamless entry into the market and the environment.

“We are looking to more collaborative work and training programs,” he said.

The VPE is a virtual laboratory used as a teaching application to provide a flexible learning space that can be customised to suit the different areas of pharmacy practice. 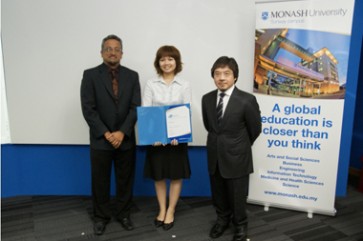 Pharmacy students at Monash University Sunway Campus will have a unique experience in pursuing their studies through the VPE, as they will be able to familiarise with a community pharmacy environment, as well as other healthcare settings applicable to the practice of pharmacy.

“The virtual pharmacy will enable students to have the opportunity to apply professional practice skills in a conducive environment,” Professor Kenneth Lee, Head of Pharmacy at the Jeffrey Cheah School of Medicine and Health Sciences said.

“This practical skill is important and helps build a student’s basic technique,” Prof Lee said of the half a million ringgit investment, which will be used by pharmacy students in their second year onwards.

“It is no secret that the country and region is facing a shortage of pharmacists. With the scholarships and the VPE, we are able to train the brightest minds using modern techniques to produce a new breed of pharmacists,” he stressed.

The Malaysian Government requires at least 13,000 pharmacists to meet its target pharmacist to population ratio of 1 in 2,000.

It is also home to the Monash Institute of Pharmaceutical Sciences (MIPS), the largest and most experienced group of pharmaceutical scientists in Australia. 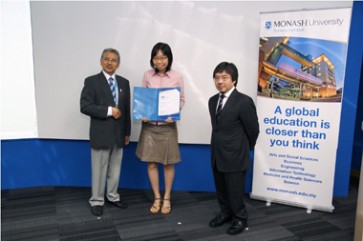