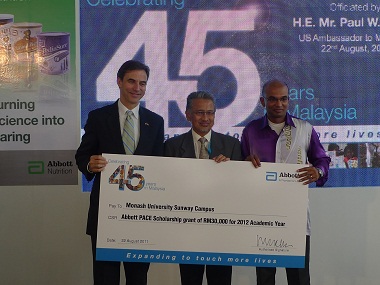 Professor Anuar said that partnerships with pharmaceutical companies like Abbott and Pfizer – the latter which came on board to support the Pharmacy program earlier this year – had a great role in pharmacy and medical education.

“They have a fantastic wealth of knowledge and experience, and some have innovations and strong research and development areas,” he said, adding that both local and international pharmaceutical companies had a role to play.

Prof Anuar said that the School’s Medical Precinct, located across the road from the campus in Bandar Sunway, was a clinical trial unit that at any one time saw six or seven ongoing clinical studies involving international pharmaceutical companies.

“These are high level clinical research which strictly adhere to the international Good Clinical Practice (GCP) Guidelines,” he said, adding that more negotiations were currently underway with new pharmaceutical companies.

Professor Lee said to keep to national and global demands of the pharmacy profession, university programs needed to incorporate elements such as new healthcare reforms and prioritise evidence-based approaches.

“The pharmacy course taught at Monash University Sunway campus will include these new elements in our curriculum as we move into the new era,” he said, adding that students’ would learn the role of a pharmacist as a primary healthcare provider.

Pharmacy students at the School, he added, would be trained in areas of public health and health economics and will have their practical knowledge in the areas of bioengineering and epidemiology enhanced.