Going the extra step for research 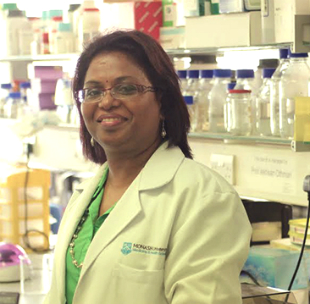 Academics and researchers often have the challenging but exciting role of delving deep into the mysteries of the universe through their research and studies. But too often, the topics of research become too self-involved and niche, rendering the results of little use other than being included into journals and research archives.

But according to Associate Professor Uma Devi Palanisamy from the Jeffrey Cheah School of Medicine and Health Sciences at Monash University Malaysia, fundamental and applied science need not be mutually exclusive. In fact, scientists should strive to find a balance of pursuing their chosen field of fundamental research, while keeping the “end-goal” of putting that very research for the greater good.

Coming from a background of applied science, Dr. Uma had always desired to know more – to know the intricate science behind the many natural products she researched on during her time at Sirim. “We were a research group that makes some science sense of a product. It’s a very applied research, meaning you do research with the sole purpose of developing a product,” she explained.

Dr Uma joined Monash University Malaysia in 2008, where she moved her research into the areas of diabetes and obesity. “My research has a lot to do with bioactive compounds from natural sources – mostly plants – that can be applied as anti-obesity and anti-diabetic agents. My team has since identified a couple of compounds which have shown to have very good ability to counter metabolic syndrome,” she said.

Metabolic syndrome is a cluster of symptoms which define the onset of diabetes, such as hyperglycemia, insulin-resistance, hypertension, hypercholesterol and so on.

Dr Uma and her team of researchers discovered that the rind of a particular local fruit, once purified, showed great promise at reducing metabolic syndrome. “We’re the first in the world to purify the compound at a larger scale, and after doing animal trials, the compound has shown to be very effective in reducing obesity and hypertension among others.”

She said the compound has shown great potential, even exhibiting “very good anti-dengue activity”. Although several neutraceuticals and corporations have expressed interest in purchasing the purified compound, Prof Uma says she is set on putting the compound through clinical trials before commercialising it.

“In Malaysia, there is no need to do clinical trials for neutraceuticals, or supplements derived from natural sources. All you need to state is what it does, you don’t actually need to prove it at a deeper, scientific level.

“But as researchers, we want to do clinical trials, we want to move on and get more valid responses. So when we say this product does this, we have the mechanisms,” she said.

Dr Uma currently supervises seven PhD students at Monash, one in IMU and one in UM, apart from her research work and teaching hours. She also often collaborates with Sirim, IMU and UM on her research.

Despite her full schedule, she readily admits to genuinely enjoying her interactions with students, and believes that her background of applied science, and her belief of doing research with an end-goal of giving back, has influenced most of her post-graduate students.

“I think it’s important that in a lot of my work, I tend to always say, 'alright, so what?' Who will benefit from this? It’s important that as researchers, we use our research to give back to society, or at least to be picked up by somebody else for further study,” said Dr Uma.

“Most of the funding for research comes from the government, which means from taxpayers,” she said. “The stakeholders are the people. Therefore, it’s crucial to delve into research which will ultimately have some practical use.”

Apart from her academic pursuits, Dr Uma has a passion for community engagement, and tries to inculcate this in her students as well. Since 2009, she has helped to organise three symposiums aimed at providing Monash students an avenue to support and advocate for the physically and learning disabled community in Malaysia. “I strongly believe the enriching benefits one gets from community engagement activities is enormous, and should be included in all academic curriculum,” she said.