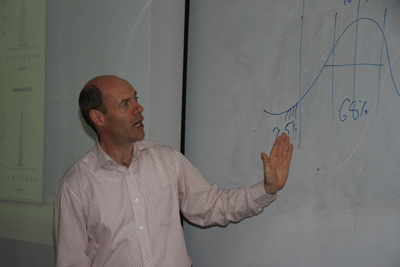 A shift in the Malaysian population pyramid has stumped Monash University Malaysia researchers, raising questions on the suitability of existing national and state health policies.

The outstanding finding is that “rural flight” in the 20-45 age group creates a significant shift in the health and social needs of the community.

“The hour glass-shaped population pyramid suggests that these rural areas may not be the drivers of economic development, but would be drivers of the government’s healthcare expenditure. It indicates that the prioritisation of health and social care provision for rural communities like Segamat needs to reflect this demographic profile rather than the national population profile” said Prof Reidpath, a population health expert.

The population pyramid forms the basis of a government’s policies – including economic, health, employment, rural and migration.

Its aim is to explore solutions to population-based problems in a middle-income country with ongoing challenges of poverty and development on the one hand and effects of globalisation and rapid industrialisation on the other.

This 'community health laboratory', Prof Reidpath explained, provides excellent data for Malaysia and the region as it was located within a 'real life', social, cultural, political, economic and physical environment.

“We are seeing rich, innovative and relevant evidence to contribute to interdisciplinary developments across, amongst others, public health, social and environmental sciences, demography, human geography, and clinical and biomedical sciences,” he said.

The latest data now shows that there is a need to cater Malaysia’s health policies to specific age groups.

“It is difficult to have single national or single state-focused policies because chances are these are not going to be right for all the communities, nor be the best utilisation of the government’s healthcare budget,” he said.

“We have to be nuanced in the policy formulation. The real challenge is defining the right formula for the delivery of healthcare,” he added.

“Logically, there would be less reason for infant and child healthcare services in rural Segamat compared with a need for healthcare services specifically for an ageing population of those 65 and above,” he said, adding that SEACO research showed that more than 50 per cent of those in this age group had at least one chronic health condition.

Acting on this evidence, SEACO researchers are looking at how healthy behaviours are adopted by the younger generation within the households to study how they can be carried forward into later life.

“We need to be looking at this 20-40 age group ‘bite’ out of the population pyramid now to identify health policy needs now and into the future” Prof Reidpath emphasised.