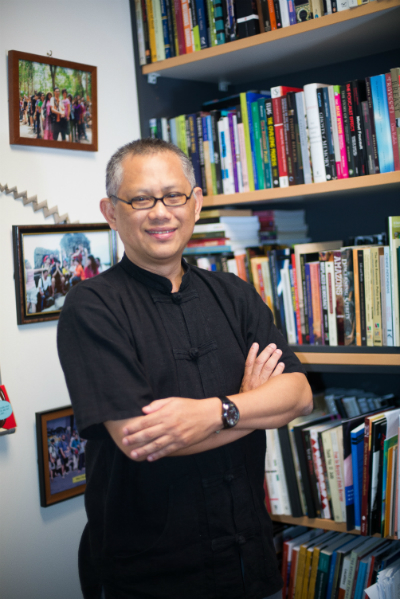 Movement characterises all sentient beings. Typically, they retreat from spaces of risks, danger and stagnation; and advance towards places where they can find opportunity, growth, refuge, and succor. But humans are culturally distinctive in that they often embellish their peripatetic movements with a sense of purpose, adventure and nostalgia.

In the milieu of budget air travel – for this region, Air Asia’s motto of “everyone can fly” comes readily to mind – a diverse range of people has been able to move more quickly and comfortably to distant places for all these varied reasons. However, travel to unfamiliar and exotic places often challenges and confounds the traveler’s parochial universe, especially when they do not square neatly with familial beliefs and practices.

For some, the subtext of their subsequent tales reaffirms the superiority of conditions at “home”. Conversely, what might be underscored is the comparative “lack” of what is found in their home countries. For others, these same experiences aid in fleshing out the anthropological dictum that despite these diversities, humans also generate beliefs and practices which render the idiosyncratic familiar somewhat strange.

Premised on this aforementioned amalgam of “reasons”, I have been organising extra-curricular annual study trips for undergraduate students of the School of Arts & Social Sciences at Monash University Malaysia since 2004. It started with an experimental 5-day jaunt in Georgetown, Penang with a bus-load full of students to look mainly at issues of urban heritage. Subsequent study trips have become more geographically expansive. Successive cohorts of student-travellers have gone beyond Malaysian shores to neighbouring countries in the Southeast Asian region plied by Air Asia -- Indonesia, Cambodia, Vietnam, Myanmar, the Philippines, and Laos. Some countries were re-visited more than once but to a different region.

These study trips can be said to resemble stand-alone project ecologies that are nevertheless articulated to one another over time and space. A typical study trip would involve an assortment of 18 individually gifted, articulate and privileged student-travellers. In our first townhouse meetings, it has been customary for me to call them “X-men”, “Avengers”, “Transformers” or “Hobbits” (depending on my mood) and underscore to them the importance of the collective purpose that will be hopefully forged (or not) during the furnace of an exhausting itinerary. They would stay together for between 10-14 days in modest accommodation, usually in family-run guesthouses located in enclaves that have vibrant streetlife cultures. All student-travellers would also be assigned to different working groups that require coordination and communication. Throughout the duration of the study trip, they would be aided by 5 local student guides selected by local host universities.

The menu of activities would usually include formal sessions with scholars, public intellectuals, civil society activists, and local community groups addressing and tackling a diverse range of concerns and issues. Among others, topics have included or involved press freedom, human rights, sustainable agriculture, street theatre, urban poor, street children, health and sex workers, disabled persons, indigenous peoples, migrant workers, refugees, ethnic and religious minorities, punk music bands, local cinema, interfaith dialogue, and so forth. Outside of these formal sessions, student-travellers also learn much from the many conversations -- usually over local meals at modest eateries -- with a spectrum of people whom they meet and interact with along the way.

All these different parts come tangibly together in a collective blog created and maintained by student-travellers. The variegated stories and reflections authored by all student-travellers and student-guides are updated daily in real time. To date, all these blogs have collectively mustered at least 70,000 hits accessed from around the world. Later, a video documentary re-tracing their journey of discovery would be produced by the student-travellers for screening in the university campus and as a lasting testimony and memoir to all those involved.

With each successive study trip of the “In Search Of…” series, a living tradition of sort has grown even as each trip bears a distinctive character borne out of the different chemistries and dynamics among each cohort. Various innovations have also been added to the signature format of the study trip along the way based on the suggestions of previous student-travellers. More recent “In Search of…” blogs now use dynamic social media platforms like instagram and twitter for instant reach. Student-travellers have also been producing multicultural shows to thank all their speakers and hosts on the final night of their trip. The same night, is then capped by a raucous and cathartic karaoke session that always surprises me on the global reach of western pop music for the young across nation-states.

What have these study trips achieved? To outsiders not privy to the amount of organisational, psychological and intellectual labour involved, they might superficially appear to be an excuse for an expensive “holiday” partly subsidised by the university. As the witness of these study trips from its genesis, the truth of the matter is, of course, a bit more complex.

Indeed, an inkling of what have transpired and moved these different cohorts of student-travellers over the years can be found in the tales of travel that they have spun themselves. In them, we see the ciphers of an array of movements, visible and invisible, banal and sublime.

For the most recent collection of travellers’ tales, see: https://insearchofyangon.wordpress.com/. This year’s destination is Laos.