Gender dialogues between Monash and Taiwan

The first intercultural exchange between Monash University Malaysia (MUM) and National Ilan University (NIU), Yilan County, Taiwan involved six students from the School of Arts and Social Sciences, and 14 NIU students engaged in sightseeing, cultural exchange activities, gender-focused lectures and discussions. SASS’s inaugural study trip beyond the shores of Southeast Asia was generously sponsored not only by SASS but also NIU courtesy of a grant received by Associate Professor Dr Yu Yilin, NIU which fulfils the Taiwanese government’s New Southbound policy where linkages are strongly promoted between Taiwan and major destinations such as Malaysia.

Campus-based lectures spotlight gender given the shared expertise of not only Yu from the Department of Foreign Languages and Literature but also that of accompanying SASS staff; Associate Professor Dr Sharon A. Bong and Dr Joseph N. Goh. Bong, who co-anchor the Gender Studies major at MUM. Bong in her lecture ‘To marry or not to marry: The law and sexuality rights in Malaysia’, invited the audience to ponder on the relevance of and barriers to same sex-marriage within the political, religious and legal framework in their respective countries. She argues on the one hand, that the Marriage Equality debate is significant as it gives visibility to the discrimination faced by many couples, particularly as these issues are still considered as taboo in Malaysia. On the other hand, a marriage equality law in itself does not adequately guarantee equal protection for all unless it is accompanied by other legislative and mindset changes. The topic follows the development of Taiwan that is close to becoming the first country in Asia to legalise same-sex marriages, and how this contrasts with the grim prospects faced by same-sex couples in Malaysia. 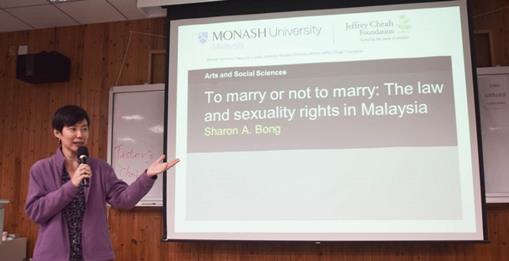 Listen Up! Bong tells it as it is on same-sex marriage in Malaysia

Bong’s lecture sparked a similar reaction amongst the Taiwanese and Malaysian students. The former noticed a stark difference between public perception and private views of same-sex marriages. Most students revealed it is the cultural and social interaction of daily experiences that mainly shaped the trajectories of narratives of same-sex couples. Therefore, the mere existence of the legal framework is not sufficient to maintain the rights of same-sex couples. Instead, the accessibility to such policies is more important and this will need conscious and continuous efforts from the authorities and related communities. However, most students agreed that it is an important priority to get the legal protection in place before dealing with subsequent problems.

The second lecture in the gender series, conducted by Goh dealt with ‘Theorising the sexual wrongdoing and ethics of Malaysian gay men’. In it, he laid out the questions that revolve around the perception of gay men which involved the standards and parameters of ethics that were applied and understood by those within and outside the gay community.

The exchange of ideas between Monash and NIU students emphasised their contrasting views on the cultural and religious significance of perceptions towards gay men, as these views are deeply embedded within the cultural and religious contexts of one community and not the other; Taiwan is largely secular whilst Malaysia, Muslim-dominant. Thus, for many, the measure of ethics is based on the sexual orientation of these men rather than their actions. Goh seeks to shift this focus from the labels of sexual orientation onto the ethos that stems from the lived experiences of gay men. Thus, ethics becomes less exclusively defined by institutions but rather by the core values and practices of gay-identifying men which includes their relationship with God.

Rose among the attentive thorns… Goh shares words of wisdom 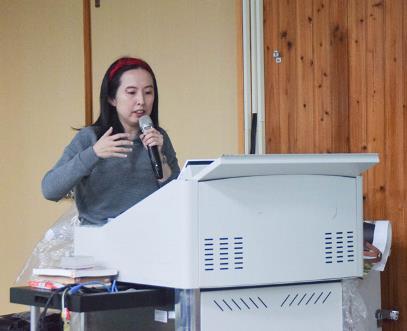 The third lecture in the gender series by Dr Kao Peiwen, NIU centred on the play M Butterfly by David Henry Hwang, which illustrates the cultural significance of the dichotomy between Western Imperialism and Orientalism. This binary is reflected in the uneven relationship dynamic between two lovers from different cultural backgrounds; a French diplomat and Chinese opera singer. The main storyline showcases the romantic yet tragic relationship set during the era of Western Imperialism in China where the French diplomat had not realised for 20 years that his lover was a man masquerading as a woman who was eventually accused of being a spy. The painful realisation of the importance of sex education and cultural ignorance could be felt in passionate discussions that followed. 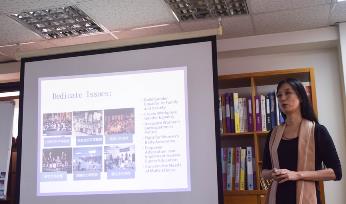 city of Taipei where students visited the Awakening Foundation, Taiwan and learned about the organisation’s sterling work in protecting women and minorities since its inception in 1982. This feminist organisation was crucial in the enactment of the 1989 Gender Equality in Employment Bill, the 2004 Gender Equity Education Act in 2004, as well as most recently, the Amendment to the Immigration Act (2007, 2009). Its specific goals include: promoting women’s participation in politics; implementing gender equality in the workplace and in families; advocating education with gender equity; fighting for women's bodily autonomy; raising awareness of sexual/gendered violence and finding solutions; and providing legal support for women in the minority groups.

Rounding off this study trip were student presentations from six groups - consisting of one Monash student who was paired up with two or three NIU students. While some groups decided to share their stories from the study trip itself, the focus on gender and sexuality was evident in an effort to bridge the understanding between the two cohorts of student in terms of the gender concepts and application of such concepts into their daily lives. Among the topics presented were: the domesticity and expected gender roles of women, the difference between the levels of gender awareness in Malaysia and Taiwan, and the contrast between the lived realities of growing up as a girl in these countries.