From 10 June 2019 to 14 June 2019, 25 Monash University Foundation Year (MUFY) students participated in the Monash Arts Immersion Program and Scholarship Competition organised by the School of Arts and Social Sciences (SASS) at Monash University Malaysia. The week-long Immersion Program combined an academic component outlining key themes and concepts taught in the School’s various areas of study with activities and competition in order to give MUFY students a better sense of what studying arts and social sciences entails, their value in society and ultimately as foundations for future careers

At the end of the program and competition, the top three overall performers were awarded partial scholarships valued at 50% for a bachelor’s degree in the School of Arts and Social Sciences. On top of that, cash prizes of RM3,000, RM2,000 and RM1,000 were also given to the first, second and third place winners respectively.

Lim Ai Li Ashley’s outstanding performance over the five-day program led her to clinch the top prize. First and second runner up positions were presented to the Batrisyia Najwa binti Azalan and Chloe Liew respectively for their exceptional performance during the sessions and workshops. 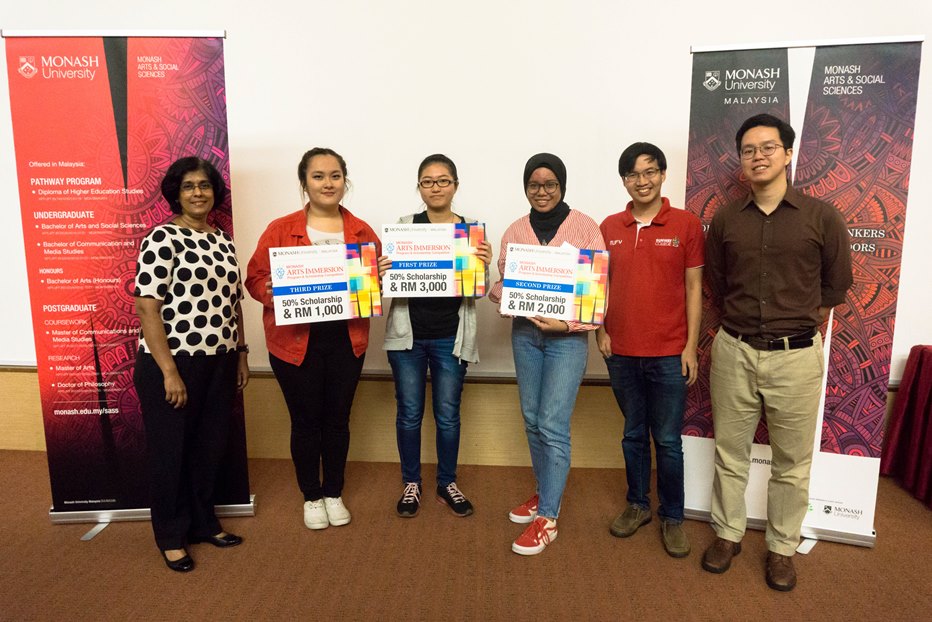 The immersion program and scholarship competition was truly one not to be missed. Over the five days, participants were given unique opportunities to delve into the world of arts and social sciences through sessions conducted by experienced lecturers in Monash University Malaysia. These sessions covered the key areas of study taught at SASS, namely screen studies, gender studies, communication, global studies and writing.

The immersion program began with a talk by lecturer in film, television and screen studies, Dr Ana Grgic. To pique the interest of the participants, Dr Ana spoke on the various dimensions of cinematography, using a few international and local short films to illustrate her points. Then, groups of participants were tasked to pitch a Malaysian film proposal using only one line of dialogue, an assigned object and a specified genre. Groups of participants creatively pitched horror, romance and comedy stories which were not only entertaining but also highlighted issues facing society today.

On the second day, the immersion session was led by gender studies lecturer, Dr Ting-Fai Yu. During his talk, Dr Ting-Fai focused on gender discrimination. He also highlighted online campaigns such as the #MeToo Movement and the campaign in South Korea whereby women destroy their makeup as an act of symbolism against unrealistic beauty standards. The gender studies workshop required participants to plan a gender-related social awareness campaign. Among some of the gender-related issues that were presented by participants were fragile masculinity and discrimination against pregnant women in the workplace.

The third day of the immersion program and scholarship competition began with a session on communication by associate professor of communication and media studies, Associate Professor Emma Baulch. In her session, she spoke on the power of the media to impact change in society. Participants' creativity was put to the test when groups were tasked to design a poster aimed at solving world issues through communication. Poster designs of varied issues such as child marriage, censorship and the sale of fur coats among others were presented by the participants.

On the fourth day of the program, lecturer in global studies, Dr Nicholas Chan Wai Kit presented on international humanitarian, economic and environmental issues, international laws and the power of politics. Participants, during the workshop, were tasked to debate the use of force in humanitarian intervention on a global scale through a case study. There was much heated discussion in the preliminary and final rounds of the debate as groups of participants considered the merits and defects of the military intervention outlined in the case study.

During the last day of the program, participants engaged in a creative writing session by associate professor in literature, Associate Professor Andrew Ng Hock Soon. In his talk, participants explored different literary genres, fictional categories and famous authors. The participants’ quick thinking was challenged during the workshop when they were tasked, in ten minutes, to create a rough storyline of either a fable, fairytale or parable featuring nine random story elements. Participants came up with science fiction fables, fantasy fairytales and even a Bildungsroman framed story.

The overall first-prize winner, Ashley said, "I think (this programme) was really fun. It really gave me a more in-depth perspective of what the school of arts and social sciences really does."

Additionally, first runner up, Batrisyia Najwa shared that the global studies workshop was her favourite. She said, “although I was not siding with ‘against’ nor ‘for’, it made me realise that some people have different opinions. And their opinions might differ but that does not mean it is wrong.”

Meanwhile, the second runner up, Chloe Liew liked the screen studies session. Chloe said, "you do dive into the specific criticism of film and you do look at different aspects like cinematography and that was really interesting to me."

Other participants of the program also shared that the immersion program and scholarship competition was enjoyable and exceeded their expectations as it provided deeper insight into SASS degree courses, improved their analytical skills as well as gave them a better understanding of issues prevalent in the world today.