Athena Ng and Ragul Paramasivam were in disbelief when they found out that they were among the 20 short-listed candidates to participate in the Merck Young Scientist poster competition finals on 28 August.

Representing the school is already nerve-wrecking but having the thought of their own project proposals being considered by Merck, the world’s oldest pharmaceutical company enterprise, is an assurance that their works are compatible with the global standard.

Athena’s project stood out for hers was an attempt to find cure for toxoplasmosis. It is a disease that results from an infection of the Toxoplasma gondii parasite, which is one of the world’s most common parasites.

The infection usually stems from eating undercooked contaminated meat, exposure from infected cat feces or mother-to-child transmission during pregnancy. To date, there is no cure for toxoplasmosis but Athena’s project kept us hopeful.

In her study, she investigated whether the T.gondii would hijack the Nrf2 pathway to gain protection from survived infected host cells. The Nrf2 is a basic leucine zipper protein that regulates the expression of antioxidant proteins that protect against oxidative damage triggered by injury and inflammation.

In other words, because the Nrf2 can regulate the stress response pathway that confers tolerance to infection, the Nrf2 mediated anti-inflammatory process may actually promote the survival of the infected host. Thus, enabling continuous replication of intracellular parasites and promoting dissemination of parasites.

Athena hopes that by understanding the strategies used by parasite to modulate host immune response, an alternative for drug therapy to fight toxoplasmosis can be established.

Ragul’s project, on the other hand, was equally notable. In his study, he pointed out the inaccuracy of serological investigations but still remains as the primary approach to identify STDs (sexually transmitted diseases).

He proposed that multi-epitope peptides are more promising and has the potential for improving the accuracy of diagnostic kits. He further added that the OpenQCM has been developed as a diagnostic platform to detect HIV/AIDS antibodies using multi-epitopic peptides.

The piezoelectric immunosensor is highly portable, USB powered, and provides frequency count on standalone software on a PC. However, Ragul felt that the applications and portability of the device can be improved for more convenience and effectiveness by interfacing it to smartphone interface, thereby creating a smartphone integrated QCM based point of care assay for STDs.

As complicated as it may sound with all the unfamiliar scientific terms, Athena and Ragul’s proposals’ were devoted to making research and biotech production simpler, faster and safer.

Although both were impressive, it was a close competition for Athena while Ragul was awarded for best poster. Regardless of the outcome, it was definitely an eye-opener for both of our students and the event has left them with more motivation to innovate and create. 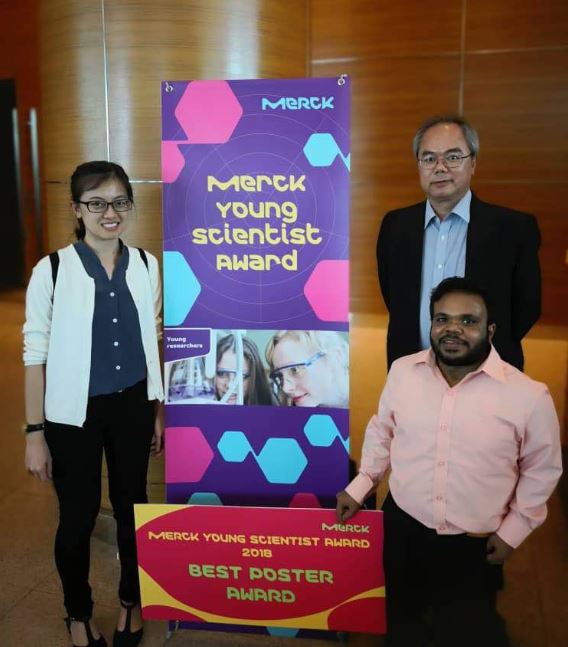