Dr Rachel from JCMSHS Department of Psychology, who represented both Alex and herself at the convention, presented their qualitative study that explores the spirituality and sufferings among indigenous people, particularly the Temiar community, in Peninsular Malaysia.

In Malaysia, the indigenous people, also known as Orang Asli, experience ongoing socio-political oppression and abuse that threatens their culture and history, while paving way for economic development.

These risk factors and stressful events could lead to detrimental mental health consequences among the Orang Asli, which was yet to be studied by psychologists at that point in time.

“The significance of the study was to advocate for the mental well-being of the Malaysian indigenous population, which was found to be strongly related to their environmental factors, such as losing their ancestral lands,” Alex shared.

"Understanding the worldviews and sufferings of the Orang Asli also contributes to the development of future mental health research tools, and policies that affect the livelihood of these communities,” she continued.

“Hence, we think it is significant to set a benchmark for international psychology in both the research topic and research method. Ultimately, we want to uncover the unique narrative of the Orang Asli through careful listening and advocacy,” Dr Rachel opined.

Having their research recognised in the world’s largest psychology conference, Alex expressed her thoughts, “It made me really happy, knowing that our project stood out to the judges but what was more important was that there were others who were actually interested about the project topic.”

“This was an important objective Dr Rachel and I had from the start, in which we hoped to not just produce a good research project, but also advocate for our indigenous friends and participants,” she added.

This systemic study is setting the groundwork for the Orang Asli’s mental health research, assessment and policies in Malaysia. 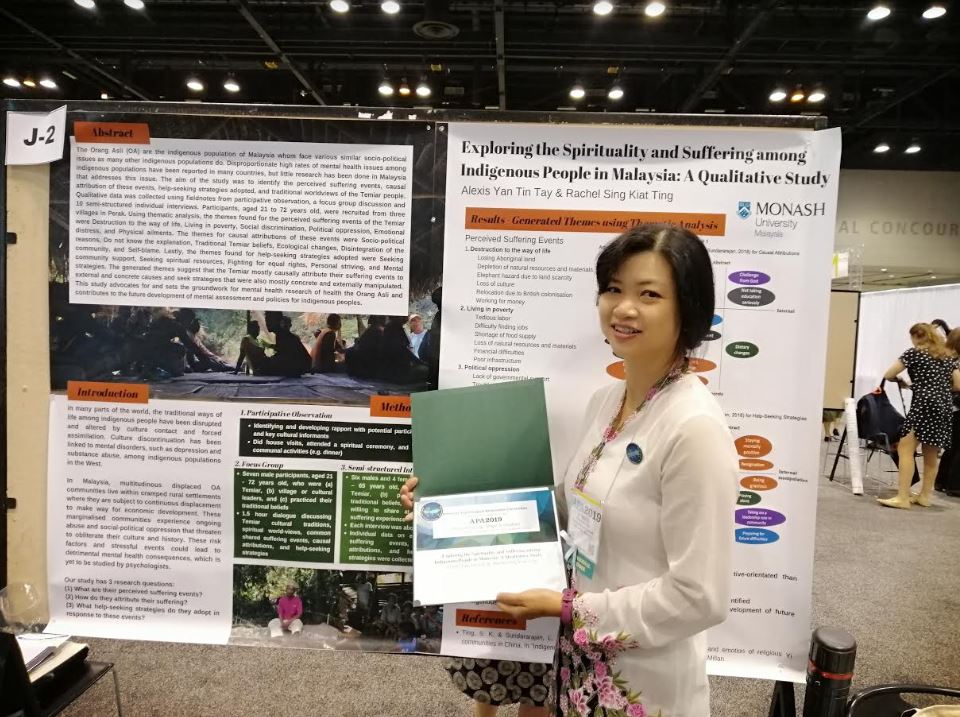