International Workshop on Food and Representation Several scholars have turned to studying food as an all-encompassing subject, considering it a powerful lens through which to examine wider changes in society. Mass migration, uneven development and globalisation, climate change and the rise of new technologies and marketplaces, contribute to the ways we think about and interact with food in the everyday. Food is not simply a culinary practice within our society but enters our lives through interrogations of the origins of certain food items, the tasting of “ethnic foods” in cosmopolitan centres, and the consumption of seductive images of haute-cuisine on our television screens. In particular, food in film plays a crucial role as it represents a multitude of social interactions, that encompass meaning, experience and action in both sensory and political realms.

Considering the increasing centrality of food in social and academic life, and the ever-growing number of films, documentaries, TV shows, and videos on social media platforms which focus on different aspects of food, cooking and nutrition, we seek to understand the effects of representing and viewing food on the constructions of race, class, gender and sexuality, as well as explore the relationship between food and migration, ecology, sustainability, ethics and body politics.

Our two-day workshop, on 29 and 30 October 2019 at School of Arts and Social Sciences, brought together a number of postcolonial, gender, film and media studies early career researchers and senior scholars from Europe, Australia and Malaysia – whose research is concerned with the representation and performance of food to explore issues of race, identity, class, gender and sexuality – to discuss these questions.

The workshop was inaugurated by Dr Sukhmani Khorana, Senior Lecturer at the University of Wollongong (Australia), discussion of the ‘Home Cooking’ episode of Netflix series Ugly Delicious, and the ‘Toronto Truths with Foodies of Colour’ episode of award-winning Racist Sandwich podcast, which uncovered the mediation of a foodie and cosmopolitan person of colour identity, and questioned whether the hosts and semiotics of the programs challenge the archetype of the adventurous meat-eating white male. Followed by Dr Vanessa Lee, postdoctoral researcher at the Linnaeus University Centre for Concurrences in Colonial and Postcolonial Studies, who analysed how national identity and Othering are constructed through representations of food in French and French-language films, through a discussion of several films: The Secret of the Grain (2007, Abdellatif Kechiche), Cuire ensemble (2014, François Pirotte and Foued Bellali), Serial (Bad) Weddings (2014, Philippe de Chauveron)and Tazzeka (2017, Jean-Philippe Gaud). After lunch, Dr Joseph Goh, Senior Lecturer at Monash University Malaysia, investigated queer theological themes in the Malaysian film Gubra (2006, Yasmin Ahmad), through an analysis of food tropes in several scenes, to foreground the dismantling of the sexuality and spirituality binary, and highlight the concrete possibility 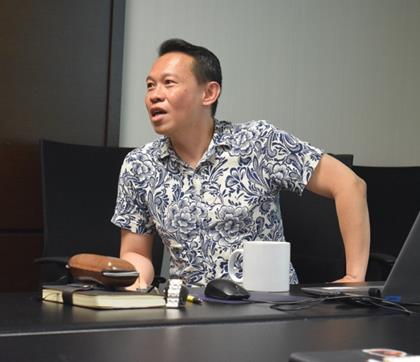 of genuine camaraderie within an ethos of dissimilitude. The presentation was followed by the screening of Yasmine Ahmad’s film Gubra, and a brief Q&A session, before the participants reunited again for the workshop dinner at Madam Kwan’s restaurant, specialising in Malaysian cuisine.

The second day of the workshop, began with a research seminar entitled “Love in a time of Extinction: Precarity and Postcolonial Studies in the Anthropocene”, by Professor Johan Höglund, Director of the Linnaeus University Centre for Concurrences in Colonial and Postcolonial Studies (Sweden), who discussed contemporary literature works and films, that recognise humans as inevitably inside the planetary ecosystem, and consequently attempt to reimagine relations between human beings, and between human and non-human species. Following the research seminar, Dr Melissa Wong, Lecturer at Monash University Malaysia, presented on the internationalisation of Mukbang or eating room from South Korea, a specific phenomenon of binge eating, in which the viewers participate by interacting through chat with the “eaters”, and that has become a new genre of food channels on YouTube across China, Japan, the USA and Malaysia. The last presentation on new Melbourne-inspired independently-owned cafes, which flourished in Malaysia since the 2010s, was delivered by our recent PhD graduate, Dr May Ting Beh, who explored consumer politics, the production of cultural capital and the place of the artisan barista. 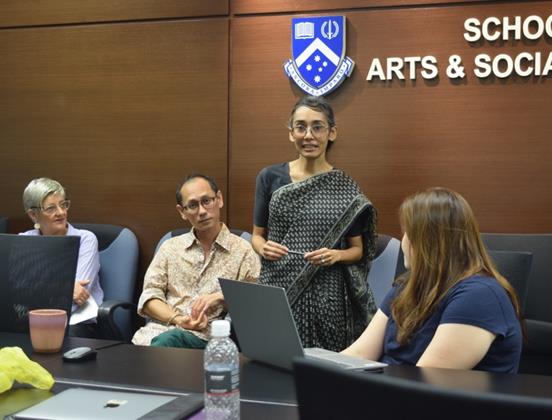 After a delicious and abundant lunch at the Grand Harbour restaurant, specialising in Cantonese cuisine, the participants assembled to discuss the major themes and issues which emerged from the workshop contributions, and to plan future research meetings and the publication of a special journal issue.

This two-day workshop on the theme of Food and Representation, was a second in the series and complements the previous workshop entitled “Food and Migration in European and Global Cinema”, organised by Professor Johan Höglund and held at the Linnaeus University Centre for Concurrences in Colonial and Postcolonial Studies in Sweden, in November 2018. A publishable outcome of the papers presented at the workshop is anticipated, as are future international workshops on the topic of Food, Migration and Representation.