The School of Arts of Monash University Malaysia together with Communication Student Alliance (COSTA) organized a study trip to Bangkok recently in early July, 2005. Entitled, "In Search of Bangkok", the tour comprised of 19 students from the Communication faculty. Equipped with a video camera, note pad and curious minds, they set foot in the capital of Thailand to don the role of novice journalists. Dr Yeoh Seng Guan, who is the Coordinator of the Communication programme, headed the six-day tour, along with the help of course manager Ms. Sasikalah Devi Balasingham.

One of the objectives of the study tour is to expose the students to some of the social, cultural and political realities of a neighboring Asean country. Another is to allow students the opportunity of practicing their journalistic and writing skills in an unfamiliar environment. To overcome the language barrier, students from the School of Political Science, Chulalongkorn University based in Bangkok, acted as tour guides and translators. 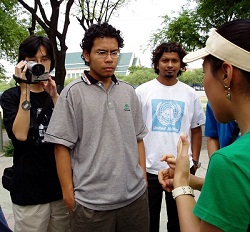 Fikri and Meng Yoe documenting the study trip in Bangkok 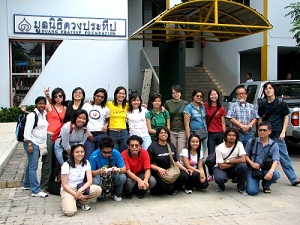 The itinerary involved meeting representatives of various non-governmental organizations and scholars. For example, at the Foundation for Women, students were given insights into issues dealing with the trafficking of women and children within Thailand and around the region. At Duang Prateep Foundation based in Klong Toey, the largest slum in Bangkok, students were given a first-hand account of welfare work extended to slum-dwellers. Near to the famous traveller’s enclave of Khao Sarn, the villagers of Pommahakan related their plight of eviction due to plans of urban redevelopment. Finally, Professor Ubonrat Siriyuvasak, a communications lecturer at Chulalongkorn University provided an update of the challenges of media reform in Thailand.

“I think the most significant thing about this trip is the fact that we experienced the non-commercial version of Bangkok. As media students, I think it’s important for us to know the realities behind the representations as portrayed by the mainstream media. I felt it was such an eye-opener to all of us there” said Kerry-Ann Augustin, president of COSTA.

Finding out more abou the plight of Pommahakan community faced with eviction because of a tourism project in old Bangkok.

Tan Meng Yoe, also a final year student, explained that the planning for the trip started late last year. "I am glad that we were made involved at all stages of the planning as it enabled us to learn to work as a team" he said.

“The issues that we explored in Thailand prompted us to think about similar issues in our home country, and to reflect on the work of Thai civil society groups like the Duang Prateep Foundation and their quest to help the less fortunate,” said another student, Sharifah Shazana.