Romancing the Land of a Thousand Bikes: In Search of Saigon 2011 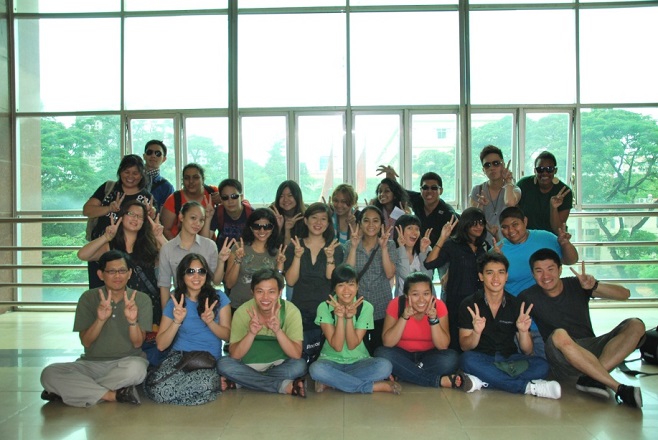 For 2011’s annual study trip, the School of Arts and Social Sciences (SASS) chose Ho Chi Minh City, Vietnam as the veritable destination for its travellers. Comprised of 19 students from countries like Kenya, Malaysia, India, Sri Lanka and Indonesia, the travellers were part of a 9 day trip to Vietnam’s commercial capital. Veteran SASS alumni traveller Eunice Phang and her mother, Susan Chai, joined the ‘In Search Of’ series for part of the trip.

Indispensable assistance was offered by Dr. Tran Dinh Lam, Director of the School, in procuring last-minute visas for 2 students who almost couldn’t make it due to embassy formalities.
Making their way into Saigon, students spent the first two days indulging in sightseeing, visiting tourist hotspots such as the War Remnants Museum, the Notre Dame Cathedral, the Cao Dai temple as well as the wartime Chu Chi tunnels.

Enriched by the experiences of the weekend, the third day brought the first visit to our host institution, VNU, where we were received warmly by Dr. Lam and Dr. Vo Van Sen, President of the University of Social Sciences and Humanities. Having visited war tourism hotspots and understood the basic ropes of the Vietnam War and what it entailed set us off nicely for Dr. Sen’s lecture on the etymology of the Vietnam War, and how it was won by the Vietnamese. Dr. Lam took on the students for a second session following a short break, explaining the economic reforms of Vietnam, its fiscal stature and contributions to a globalised world order, emphasising the imperative role education must play for Vietnam’s future growth. Students then moved to the site for the next session, the Mariamman temple, located in the heart of the city, where students came to understand the role of the state in religion, especially one as marginal as Hinduism in a socialist state like Vietnam. We also witnessed how the religion was re-interpreted and customised in Vietnam differently (as opposed to back home), so as to allude to Vietnamese palates.
The 'In Search of Saigon' crew at host institution VNU

Day Four was an important and unique experience for all travellers who were, thanks to the help of the Chuong Trinh AIDS organisation, privy to various experiences of the same disease as faced by different members of the general Vietnamese community. Divided into four groups, each traveller experienced for a day what it was like living with HIV/AIDS while faced with the added pressure of poverty; in some cases stark. While some students visited the ‘Ghost Town’ and were offered lunch by their hosts (also residents of Ghost Town), others were shown community efforts by pagodas and churches in endeavours to assist HIV/AIDS afflicted people, while still others met and spent time with families living with HIV/AIDS.

Day Five brought us to the offices of the Archbishop of Ho Chi Minh and the Catholic Church organisation of Caritas. Mr. Joe, from the organisation, explained Caritas’ role in helping various pockets of Ho Chi Minh’s society and how philanthropy efforts were organised, statistics of people affected by HIV/AIDS and disabilities and how Caritas maintains its operations in a state where religious activities carry loaded connotations. Caritas was previously also shut down by the Government, having resumed its charity work only recently.

On the sixth day in sunny Saigon, travellers first visited Doi Rat Dep (DRD), an organisation that aids People with Disabilities (PWDs). Functioning as a clubhouse, the founder of the organisation Ms. Vo Thi Hoang Yen explained what it was like living with disabilities in Ho Chi Minh city and the impediments faced by PWDs in day-to-day transactions. Combating stigma that arose from religious beliefs like karma raised an interesting point on how people negotiate disabilities variedly depending on religious acknowledgement. Ms. Vo also explained the many activities and services DRD offers, among which are social living skills, open mike nights at the clubhouse and even a soon-to-be-introduced speed dating session! Following an introduction session where all travellers indicated their names in sign language, we made our way to a Catholic church to sightsee, students even having the chance to experience Vietnamese downpour, getting drenched trying to back our way back to the hotel. Frantic drying ensued in time for our last session with Mr. Nicholas Lainez of Alliance Anti-Traffic, who in a sit-down session at the hotel lobby explained to us the multiplicity of the human trafficking situation in Vietnam. He noted hurdles that came with trafficking, the measures AAT takes with regards to providing shelters and counselling for sexually abused women, as well as what it was like to be an anthropologist trying to ‘go native’, working with the subjects.

Having concluded the last of the official sessions for the In Search of Saigon leg, we set out bright and early on the seventh day for an overnight trip to the Mekong Delta, which branches out to six different countries, its trademark murky waters providing much amusement for the brave travellers. Hopping by boat from place to place, students witnessed among other things how rice noodles, honey and even rice is produced. Packed off in little boats, the next day we saw theCai Rang floating market up and close selling fresh market produce at wholesale rates while also experiencing a mobile petrol station in the middle of the Delta! By night however, the students weren’t taking it easy. Cultural Night practices, to put on a show for our gracious hosts, were in full swing, even being taken out to Saigon’s public parks the next day when travellers returned from the Mekong Delta (causing mild excitement amongst tourists and locals both in the park). Travellers giving all guests an acapella treat on Cultural Night

Day Nine brought the traditional last-day rushes of shopping and hurried demeanour, the flurry of activity compounded by the realisation that very soon the Saigon dream was about to end. Rushing off for our last obligation as part of the crew, the travellers put on an impressive line-up of performances with showcases like the Dikir Barat, bhangra, acapella singing for the traditional Cultural Night. The student guides did their part too, with Vietnamese duets and tribute songs for all to enjoy. Wiping away the many tears, students walked back to the hotel one last time through the pathways of Saigon, reminiscing about the good times enjoyed, the memories made and the friendships forged.

If Night Nine was any indication of the tears Day Ten was about to bring, then it was a day that surely didn’t disappoint. Sharing warm hugs and endless Thank Yous with the guides we’ve come to spend days and nights with, new friends who were previously unfamiliar faces, recounting hilarious experiences and the knowledge taken away from the trip, all the travellers headed back home with a bittersweet feeling- happiness to be going back to the comforts of home and family, but overwhelming sadness at leaving a second home and a new-found family behind.

To catch more of their travels and travails, visit www.insearchofsaigon.blogspot.com