Sex and the City

In mid-April, 2008, the Arts Programme together with COSTA (Communication Students Association) organised a study visit to the PT (Pink Triangle) Foundation, an NGO located in the infamous Chow Kit area. Chow Kit lies near to the heart of old Kuala Lumpur and is a haven for drug addicts and sex workers in the popular imagination.

“What we are doing in the PT foundation is basically AIDS/HIV awareness and prevention. We also have free and anonymous aids testing and screening,” said Jeremy Kwan, the chief officer at PT Foundation.

PT foundation was started in 1987. This was also during the time when the HIV/AIDS epidemic was first detected in Malaysia. However, the logo and phrase of the “Pink Triangle” dates back to the holocaust period in the 1940s when homosexuals were thus marked to signify their deviant sexuality. “Today it has been appropriated as a symbol of empowerment for sexual minorities,” said Jeremy Kwan.

Students were briefed on the concept of safe sex, shown the right way to put on a condom, and helped assemble safe sex packs. Inside the safe sex pack, which the PT Foundation calls the “survival kit of today”, are usually 2 condoms, a packet of lubricant and information cards on help hotline and places to go for free HIV/AIDS testing.

Later on, the students were taken for a short walk through the back alleys of Chow Kit before arriving at a place of refuge for the vulnerable communities in the area. Here, they can sleep, clean up, do their laundry, given food, and even have their small children attend tuition classes. Damsha, the Senior Program Manager, said that no matter how bad the situation could be for them, the center provided them with that little bit of hope. “No one will be left behind here. They are all treated the same and no one is different. No one gets special treatment and no one is treated badly,” she added.

It as an eye opening afternoon that challenged most of our perceptions on taboo subjects. According to Max Tan, a final year Communication student, “Just because they are sex workers doesn’t mean they should be discriminated against. Many did not choose this kind of life and even if they did, they may have much choice in the matter.” One of the key objectives of PT Foundation is to break the stigma surrounding HIV/AIDS.  As the main NGO working on HIV/AIDS prevention among marginalized groups on the streets of Kuala Lumpur, it has faced several serious challenges. In 2005, it was almost shut down due to lack of funding. Recently, the organization has turned twenty-one years of age.

“It’s good to know that there are people right here in Malaysia who will not succumb to the norm,” said Anthea Haryoko, an Indonesian student. 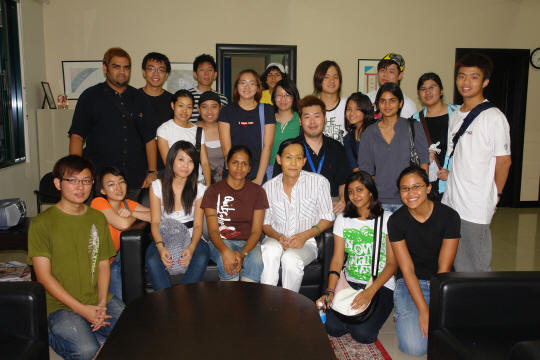 At the center for  sex workers and their children

“PT Foundation inspires me in its efforts to make us understand the importance of safe sex in a society like today,” added Kelvin Tan, a first year Arts student.