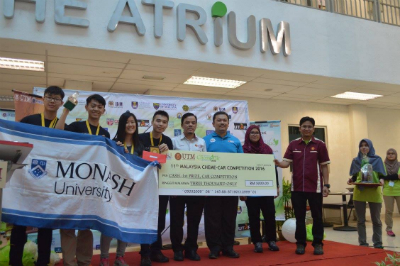 Team Grandiose from the School of Engineering emerged as the overall champion at the 11th Malaysia Chem-E Car Competition 2016, held on 8-9 April 2016 in University of Technology Malaysia (UTM).

62 teams from universities across Malaysia and Indonesia participated in the competition. The competition had two components - Car Performance and Poster. In Car Performance, teams were required to design and construct chemically-powered cars, that could fit within a box of 40cm x 30cm x 18cm. The cars were required to travel a stipulated journey and to hit bowling pins (targets) aligned at a set distance, while safely carrying a load of water.

Team Grandiose, consisting of chemical and electrical engineering students, outperformed other teams, as they were the only team to hit the most pins and stop within the crossing line. They also came in fifth in the Poster Competition. The team’s scores from both categories were the highest when combined, thus enabling them to emerge as overall champions.

“Though we tried to minimise the variables and uncertainty to obtain good results, we owed our winning to luck as well,” said Lim. Team leader, Ho, echoed his teammate’s sentiments and stated that one of the winning factors was because of competitions organised by the Monash Chem-E Car Committee. In preparing teams, the committee organised and ran simulated competitions in Monash, giving teams the chance to work within the time limit, as well as the opportunity to experience how being in the competition felt like. 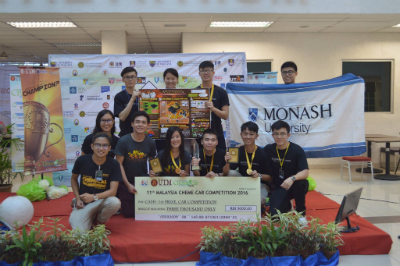 “It was a surprise winning this competition. We didn’t expect to hit the pins, but we did,” added Ong. According to Tan, the model was finalised the day before the competition. This is the first win for a Monash Malaysia team. They brought home MYR3,000 cash prize and a Perpetual Trophy.

The objective of the competition was to provide opportunities for students to showcase their creativity in the field of chemical engineering and to enable them to apply what they have learned in the classroom. The competition also aims to develop more innovative, competitive and resourceful engineers as they play an essential role in the development and progress of the country.