It was a car racing competition with a twist - the cars run on chemicals rather than batteries or fuel. Organised by the School of Engineering on 4 March, participants of the competition had to design and construct chemically-powered cars that could fit into a box of 40cm x 30cm x 18cm dimension.

Out of the six participating teams, two teams were chosen to represent Monash University Malaysia in the coming 10th Malaysia ChemE Car Competition 2015 on 10-11 April in Universiti Kebangsaan Malaysia.

“This kind of competitions provide the chance for students to apply what they have learned in the classroom,” said Associate Professor Chan Eng Seng when launching the event, adding that problem-solving, teamwork and time management was essential which would be good training for the students’ future careers. 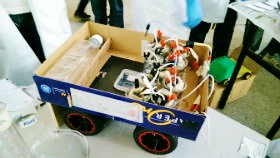 The winner was determined by a combined score from two runs, for travelling the correct distance of 9 metres and for safely carrying its cargo. Teams also participated in a poster competition.

Team Sarrpp emerged as the winner for the ChemE Car Competition and Team Beyond Horizon won the poster competition.