"I felt that my education at this university was well rounded" 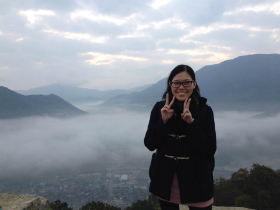 Graduating with a degree from Monash had always been something to be proud of to me. I felt that my education at this university was well rounded. Not only was I trained to have the skills required for my previous job as a microbiologist, I had the knowledge and experience to do the work I am doing today.

After graduating from Monash, I worked as an R&D microbiologist at CCM for three years (2010-2013). I was the only microbiologist and the only person in the research centre. My experience as an honours student certainly helped me survive in the company and I was able to manage the entire laboratory alone.

In 2013, I was accepted into a Ph.D. program in Keio University, which I only knew as the top ranking private university in Japan. They had an opening for a scholarship position and I decided to apply because working in a research center has made me realize that having a Ph.D. was a worthwhile necessity.

Getting the scholarship from the Japanese government (MEXT scholarship) wasn’t easy, however. But with the help from the Monash science department (both in Malaysia and Australia), I was able to get the necessary recommendation letters and information required to apply. Getting to know the lecturers while doing my honours degree certainly helped with the process and I was glad that I had the opportunity to work with them.

I am now a second year Ph.D. student at the Laboratory of Mechanistic Chemistry of Biomolecules in the Department of Chemistry, Keio University, Japan. My laboratory basically specializes in the chemistry or mechanisms of proteins that cause amyotrophic lateral sclerosis or ALS in nerve cells. You might have heard of the ice bucket challenge, which is supposed to help you feel the very first symptoms an ALS patient feels. My research involves studying the proteins involved in the possible pathways that lead to ALS.

In Japan, I’ve had the opportunity to present at scientific conferences within the country and in July I will be presenting my work in Beijing for the ICBIC conference. I was also able to visit and present at a seminar held in the Institute of Molecular Science in Okazaki. Compared to my peers, I felt that I had an edge because I was already so used to presenting in front of people.

Research-wise, I had the privilege to perform crystallization experiments at Spring8, the world’s largest 3rd generation synchrotron located at Harima (Hyogo, Japan). One of the proteins I work with was crystallized here in order to find out what is its structure by using the highly focused X-ray beams that can only be produced by large synchrotrons such as Spring8. Without coming to Japan, or meeting my current professor, I don’t think I would’ve had the opportunity to be a part of such amazing work or be able to see the insides of historically significant research facilities; and I certainly wouldn’t have been able to meet the people behind the research I’ve only been reading about.

Right now, I am hoping to publish my work and I hope that however my research turns out, my work will be of some help to society.

Personally, travelling to a different country with such a different culture was exciting. Monash had a student exchange program when I was in my second year so I was exposed to being away from home for awhile. (I studied at Clayton for 6 months.) Right now, I have not only moved to a different country, I am speaking an entirely different language. I am only thankful that the research program is conducted in English (otherwise, no scholarship, however great, would be enough). The conferences and my personal trips have brought me to most of the West and North of Japan. I am based in Tokyo so I was able to travel around the area.