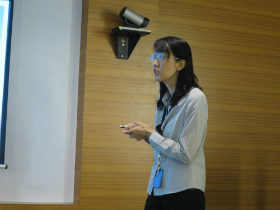 In the seventh instalment of the Professors Advisory Group (PAG) 2015 lunchtime seminar series powered by PechaKucha, three academics presented a brief overview of some priority areas in their research.

‘三つ子の魂百まで (Mitsugo no tamashii hyaku made)’ is a Japanese saying which literally means that the soul of a three-year-old child will be the same until he/she turns 100-years-old. Recent studies have suggested that early life stress may have long term consequences on a child’s behaviour, both physically and mentally. According to Associate Professor Tomoko Soga, 50% of abused children suffer from post-traumatic stress disorder, (PTSD) and usually have smaller brains.

Early life stress increases the stress hormone, which causes changes in the brain architecture, responsible for attention, learning, memory and perception. It is during these years that brains are rapidly developing, and are thus sensitive to environmental influences. “Human and animal studies have shown that early life stress impact the growth of the brain and cognitive functions associated with brain regions,” said Assoc. Prof. Soga. 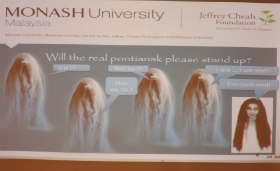 The afternoon session took on a ghostly turn as Associate Professor Andrew Ng Hock Soon from the School of Arts and Social Sciences, whose research focuses on gothic/horror presented on ‘The Culture Work of Horror’. He explained the various creatures in South East Asia and the west, and compared them.

Assoc. Prof Ng also said that works of horror are mainly seen in an individual’s historical and cultural context, and that it is able to invoke contingent anxieties. He went on to share his thoughts as to why ghosts in the Asian region are mainly women and how they differ from ghosts depicted in the western culture.

“What’s interesting about goth is that it is ambiguous,” he said. According to Assoc. Prof Ng, a lot of criticism is expressed through the gothic ways, but each criticism is hidden as such that they are aligned with the status quo. From literature and urban legends to film, horror is no doubt an integral part of modern society’s entertainment.

“Sexual and reproductive health is one of the areas of health where everybody has an opinion about what others do, how they do it, when they do it, who they do it with and the consequences of whether it is good or bad,” stated Professor Pascale Allotey, Professor of Public Health from the Jeffrey Cheah School of Medicine and Health Sciences. 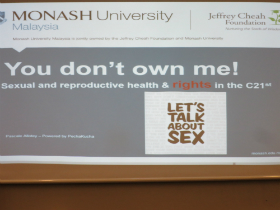 A slide presentation by Prof Allotey.

Prof Allotey shared that it is an aspect of health in which the Vatican and the Catholic Church are most actively engaged with. There are significant challenges in how sexual and reproductive health rights are interpreted in the law of various countries, how they can be opposed and the tensions that can occur because of it.

Prof Allotey went on to say that sexual violence is universally prevalent and one of the most unpleasant aspects in this area of work. It poses such a major problem that the United Nations Secretary General has nominated addressing sexual violence as one of his priority areas.

The Professors Advisory Group (PAG) 2015 lunchtime seminar series powered by PechaKucha is held once a month, featuring three to four speakers each time. PechaKucha - which means ‘chit chat’ in Japanese - is a series of lunchtime talks organised by the Professors Advisory Group (PAG). The concise and fast-paced talks introduces the audience to a range of disciplinary areas covered by Monash Malaysia’s academics.