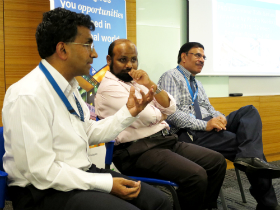 In the first session of PechaKucha for the year 2015, three academics took on the challenge of presenting their research in 20 slides within 6 minutes and 40 seconds, succeeding to provoke a lively discussion on various issues that affect us all.

“For some, life is a bowl of cherries - these are the Kim Kardashians and Justin Biebers,” said first speaker Professor Sadequr Rahman from the School of Science at the start of his presentation. “But for me, life is like a plate of rice.” Prof Sadequr went on to explain the history of rice and scientists' efforts to improve it to meet human needs.

His research, however, concentrates on the testing the digestibility of rice. “We have tested for diabetes and blood sugar in relation to rice, and we want to better understand starch production,” said Prof Sadequr. He explained that rice that is slowly digestible would mean a slower release of sugar which would be healthier for consumption.

The second speaker, School of Engineering’s Associate Professor Rajendran Parthiban, explained his research on various types of lighting such as LED lighting and how it could affect sleep patterns. “Light can have an effect on sleep patterns and alertness, and we need to find out how much light is applied and when in the day,” he said, adding that he is also studying the effects of light in illumination, positioning, and public perception of LED lighting. Associate Professor Anil Gandhi from Clinical School Johor Bahru presented on ‘Robotic surgery: Who is operating upon me?’ and defined robotic surgery as “computer-assisted surgery” whereby a surgeon operates using machines. “These days, the smaller the incision, the better the surgeon,” Dr Anil noted. “But we’re still not happy even with just a few holes, we don’t want any scars!” He added that there is now Trans Oral Robotic Surgery which involves surgery through body cavities.

He cast his own doubts on the future of surgery technology, saying that even though a 2001 example of a surgeon in United States operating on a patient in France brought hopes that surgery could be performed from afar on patients in space stations, there were still many limitations that only a physical surgeon could overcome.

PechaKucha - which means ‘chit chat’ in Japanese - is a series of lunchtime talks organised by the Professors Advisory Group (PAG). The concise and fast-paced talks introduces to the audience the range of disciplinary areas covered by Monash Malaysia’s academics.

PechaKucha is held once a month during lunch hours, featuring three speakers each time.