Epilepsy: not just a disease

Professor Josemir W Sander’s interest in epilepsy began in medical school. While working part-time as a paramedic, he encountered his first patient with epilepsy and felt overwhelmed as he witnessed the seizures. Three decades later, his journey to better understand epilepsy has led him to realise the unexpectedly heavy burden that epilepsy imposes on society, as well as its high likelihood of being accompanied by other problems.

“Epilepsy is not really a disease. It’s a symptom,” says Prof Sander, who is currently Professor of Neurology at University College London’s Institute of Neurology, as well as Clinical Lead for epilepsy research at National Hospital for Neurology and Neurosurgery, Queen Square, London.

The prominent researcher was a guest speaker at a Sir John Monash Lecture at Monash University Malaysia. He spoke on the nature of epilepsy and its far-reaching implications.

“At last count, there are more than 400 different conditions – either genetic or other conditions – associated as triggers of epilepsy or causing epilepsy. Epilepsy is basically the result of an underlying problem of the brain, but the comorbidities are probably also telling us that this is a system problem. It’s more than just the brain.”

Epilepsy, which is the tendency to have unprovoked seizures, affects over 60 million people worldwide. Among serious neurological conditions, it is the most common.

Since epilepsy is often viewed with superstition, patients sometime suffer more from social stigma than from the medical condition itself. Prof Sander pointed out the sad irony of their situation: merely a few minutes of seizures can cause a lifetime of stigma. It can be difficult for patients to obtain employment.

The burden of epilepsy falls not only on patients, but also upon society as a whole. Measured in terms of DALYs (Disability Adjusted Life Years, a measure of the burden imposed on society by years lost to ill health), epilepsy contributes to a surprisingly high 1% of all DALYs – much more than multiple sclerosis, Parkinson’s, or even Alzheimer’s disease. This is because epilepsy is experienced by patients for a longer span of years than these other diseases. Prof Sander called it “a condition of both ends of life,” with higher occurrence among senior citizens and children.

Yet, epilepsy is not considered a priority problem in most countries. While misperceived as benign, epilepsy actually has a high SMR (standard mortality rate) in some parts of the world. 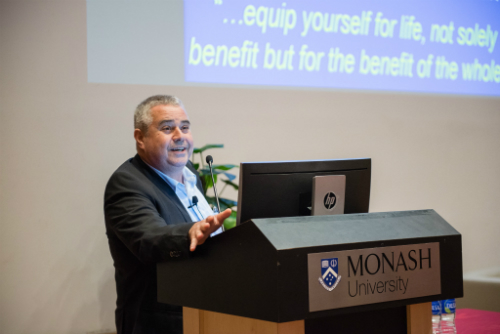 “Shoot in the dark and hope it works”

Not enough is understood of epilepsy in terms of cause and treatment. This lack of knowledge is frustrating, Prof Sander shared. “I like to think of myself as a scientist. But, often, when I treat people with epilepsy, I’m no better than a shaman, dishing out medications that I’m not quite sure are going to work.”

Prof Sander expressed a desire for greater understanding of epilepsy’s genetic factors. He cautioned, though, that saying a genetic factor exists does not mean epilepsy is necessarily inherited. In terms of the geographic risk factor, he gave the example of a particular tapeworm. Responsible for causing 10 to 20 million cases of epilepsy, this tapeworm is endemic in parts of the world such as Punjab in India, west coast Africa, and west coast Latin America.

While modern-day treatments for epilepsy are an improvement – in the past, folk medicine has included exorcism and drilling into the skull – they are still largely “flawed,” Prof Sander lamented. Treatment falls short when it treats seizures but fails to address the underlying cause.

The current approach is to merely “shoot in the dark and hope it works,” trying one drug before moving on to another. Though new antiepileptic drugs have been developed, patient outcomes have not really improved over the last 30 years. Roughly only 30% of patients have responded positively to anti-epileptic drugs, which is the primary form of treatment. Meanwhile, other options such as surgery and special diets are only feasible or effective for a tiny minority of patients.

“Epilepsy… and what else?”

There is also the problem of misdiagnosis. “Is it really epilepsy?” is the first question one must ask when presented with a case of seizures. According to Prof Sander, over half of patients diagnosed with epilepsy at GP clinics and community clinics do not actually have the condition.

The second question to ask is “Epilepsy and what else?” If the patient does indeed have epilepsy, this “should increase suspicion of other disorders present. We should be actively screening for other problems.” Epilepsy shares risk factors with other conditions. For example, a Type 1 diabetes patient is more likely to develop a certain type of epilepsy, and vice versa.

Epilepsy has high rates of comorbidity. That is, strong likelihood of the presence of other medical conditions. These other conditions may precede epilepsy or occur simultaneously. They may be related or unrelated to the epilepsy. It’s important to detect them because this determines the type and cost of treatment and affects patients’ quality of life.

A vision for epilepsy treatment

Describing his vision for epilepsy treatment, Prof Sander hopes that medical practitioners will “move away from this disease concept and accept this as a symptom complex, part of a collection of many different conditions.”

He expressed a desire to eventually see “personalised treatment that will make a difference” and effective drugs to “treat someone from day one, not shoot in the dark for years before we get the right treatment.”