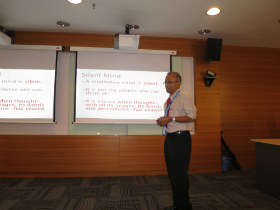 In the sixth instalment of the Professors Advisory Group (PAG) 2015 lunchtime seminar series powered by PechaKucha, four academics from the Jeffrey Cheah School of Medicine and Health Sciences shed some light on their research findings, invoking an active question and answer session, along with some humour.

“A meditative mind is silent. It is not the silence one can think of. It is silence when thought, with all its images, its words and perceptions, has ceased,” said Clinical Associate Professor Dr. Naganathan Kathiresan Pillai when explaining the benefits of meditation.

He listed four elements common in meditation - a quiet environment, a comfortable position, the focussing of attention to a rhythmic device such as breathing, and passively letting the mind wander without dwelling on any particular thought. Fasting and a vegan diet is ideal to accompany meditation, and if practiced well, meditation may enhance the immune function and relief anxiety, depression, and insomnia, said Dr. Naganathan. 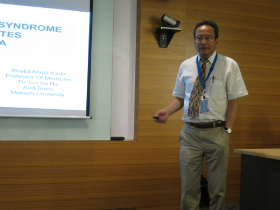 Professor Dato’ Dr Khalid Abdul Kadir, a Professor of Medicine, said if a person suffers from central obesity, hypertension, hyperglycaemia, dyslipidaemia and insulin resistance, such person is at high risk of getting Type 2 Diabetes Mellitus, which can lead to heart disease.

“Our research interest is in the adrenal gland that responds to stress by producing steroid cortisol, which is a steroid for glucose. What happens with increased stress is that you get increased cortisol production, causing increased insulin resistance, diabetes, hypertension called Cushing’s syndrome,” said Prof Khalid. 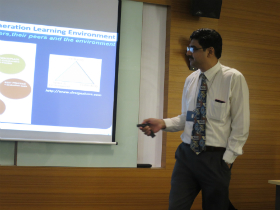 In his research, Prof Khalid found that a compound from the roots of licorice called glycyrrhizic acid (GCA) was able to inhibit metabolic and behavioural effects in chronic stress, and lower insulin resistance in chronic stress. A further research on GCA is currently being conducted by Prof Khalid and his team.

Assoc. Prof Arkendu said that students learn more from peers and the environment than from teachers. He spoke about distance and collaborative learning using the teacher’s smart table, where resources are streamed from a Multitouch Tabletop Computer (MTC) to the students’ tables. The MTC is connected with a high resolution camera, microphone, patient couch, and networked computer. Assoc. Professor Lakshmi on the other hand, presented the pedagogical basis of their work on learning technology. “Understanding human anatomy and the organisation of body structure is an integral part of becoming a skilled doctor and requires hands-on learning of three-dimensional visually complex materials in practical learning,” she said. The MAPEL Lab (Medical Anatomy and Pathology E-Learning Laboratory), where the MTC smart table is also housed, is able to teach multiple classes for medicine, pharmacy and biomedicine with a variety of practical resources.

The Professors Advisory Group (PAG) 2015 lunchtime seminar series powered by PechaKucha is held once a month, featuring three to four speakers each time. PechaKucha - which means ‘chit chat’ in Japanese - is a series of lunchtime talks organised by the Professors Advisory Group (PAG). The concise and fast-paced talks introduces the audience to a range of disciplinary areas covered by Monash Malaysia’s academics.