Academics to the fore in PechaKucha 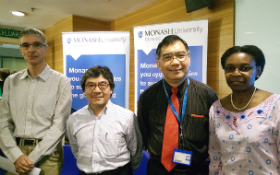 In the second session of Pecha Kucha for the year 2015, four academics took on the challenge to present their research within 6 minutes and 40 seconds. They managed to provoke a lively discussion, along with some laughter.

To ensure efficient distribution of resources, the Health Technology Assessment (HTA) is developed to support evidence-based policy making to identify and ensure early access to new health technologies. As a component of health economics, Professor Kenneth Lee, Head of School of Pharmacy, debated if HTA should be considered a science, art, or pseudoscience. Pseudoscience means a lack of science, invalid scientific method, unprovable claims and lack of openness. “HTA is made up of two major domains- the decision making domain and the research domain,” Prof Lee said in defence of his claims that HTA is a study of science.

Two out of three deaths from road accidents are commuting accidents, according to the Social Security Organisation (SOCSO). Professor Rusli Nordin from the Jeffrey Cheah School of Medicine and Health Sciences noted that a combination of urbanization, congestion and distraction greater than individual defensive driving skills will cause accidents. “UiTM (MARA University of Technology) research team discovered five factors that cause accidents – rushing to work, speeding, reckless driving, texting and lack of focus,” said Prof Rusli, adding that SOCSO has launched an accident prevention plan for both employers and employees which included a Safe Motorcycle Riding Program (SMRP) and Defensive Driving Program (DOP). 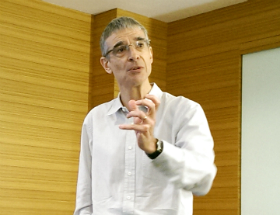 “SEACO, the Southeast Asia community observatory is an important symbol of what higher education institutions are supposed to be about,” started Professor Pascale Allotey, a Professor of Public Health. Her research, which focuses on the symbiosis between higher education and society, relies heavily on the wealth of information collected over time. Last year, SEACO met the benchmarks to be accepted as an associate member of INDEPTH, a network of health and demographic surveillance systems (HDSSs), the first in Malaysia. “The populations we cover represent the ethnic mix of Malaysia in similar proportion and the ethnic diversity is one of the features which makes the SEACO site unique within the network,” she noted.

According to Associate Professor Gareth Leeves from the School of Business, international migration impacts heavily on source countries and one major impact is through the migrants’ transfer of funds back home. As such, remittances has now become a major component of international financial flows. “Remittances promote economic development and encourages people to educate themselves,” he said.