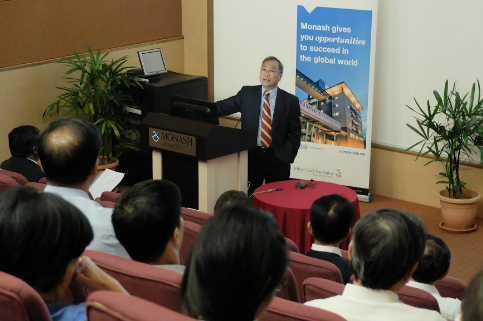 “The reason for political unraveling in Thailand and Malaysia is because of the economic slowdown,” he said, pointing to Argentina as a case study.

With the topic, ‘The Middle-Income Trap Phenomenon: First in Latin America, Now in Southeast Asia Too?’, Prof Woo said Malaysia has become stuck in the “middle-income trap” and drew comparisons with Taiwan and South Korea. Using a ‘catch-up ratio’ that calculates the standard of living in a country compared to the US, he found that Malaysia has stayed the same for the last 20 years while Taiwan and South Korea have continued their upward trend.

“The population is used to 9% Gross Domestic Product (GDP) growth, but now we’re only getting an average of 4%, so people are unhappy,” Prof Woo said, referring to Malaysia’s 9% growth before the Asian Financial Crisis in 1997.

Prof Woo added that the country’s governance was too centralised. He gave the example of bus routes in Penang, every one of which were planned in Putrajaya rather than by the state government. “If the EPU (Economic Planning Unit) is stuck, the whole country is stuck,” he said. “If we’re going to continue growing, political reforms have to take place.”

He said that current economic policies worked for Malaysia in the past but cannot sustain economic growth as it has caused brain drain and capital flight, while investments from Government-Linked Companies have dropped because of decreased oil revenues. He added that with China’s accession to the World Trade Organisation in 2001, “whatever that used to flow to Malaysia now flowed to China”, and foreign direct investments in Malaysia plunged. 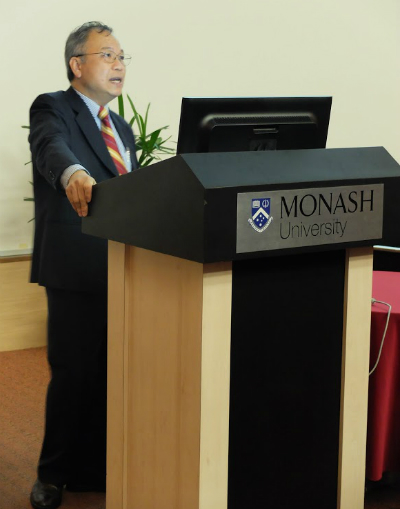 Prof Woo suggested policy changes such as privatisation, diffusion of knowledge from advanced countries, ‘green’ urbanisation to attract human capital, and allowing public monitoring of the government through the media.

As moderator of the lecture, Monash University Malaysia’s Deputy President (Strategy) Professor Mahendhiran Nair said the topic was timely in the light of the ASEAN Free Trade Pact in 2015, the impending signing of the Trans Pacific Partnership Agreement and the preparation of the 11th Malaysia Plan.

The next public lecture will be held on 25 August, delivered by accounting and finance scholar Professor Ferdinand Gul. For more details on the Sir John Monash Public Lecture Series, please contact crm@monash.edu.