The first Sir John Monash Lecture of 2017 kicked off on a high note with award winning molecular biologist Dr Jim Peacock presenting a talk, 'Global food security in the 21st century: A challenge we can meet', at Monash University Malaysia.

Held in partnership with the Jeffrey Cheah Distinguished Speakers Series, the talk highlighted the need for increasing the supply of nutritious food in line with the world’s growing population.

Speaking to a packed audience comprising of students and working professionals, Dr Peacock shared that the world population is expected to hit the nine billion mark by 2050, adding that there is thus a dire need to increase the world’s food production.

The distinguished professor from the University of Technology Sydney added that it is not merely about increasing the quantity of food, but also its quality by 2050.

Dr Peacock explained that the world currently lacks food supply. Some 850,000 people starve each year while an estimated 20 million people have insufficient food. He noted that there are many contributing factors to that, chief among them, food production.

Linking the lack of quality food to serious health epidemics, he added that diabetes, a major non-infectious disease, has many substantial negative effects in societies. Dr Peacock said the disease has been rapidly rising across the world and that “it’s something we just can’t ignore”.

He shared that in 2015, some 415 million people worldwide have diabetes, mostly Type 2 diabetes. He added that Type 2 diabetes has been rapidly increasing from 1994 to 2014. 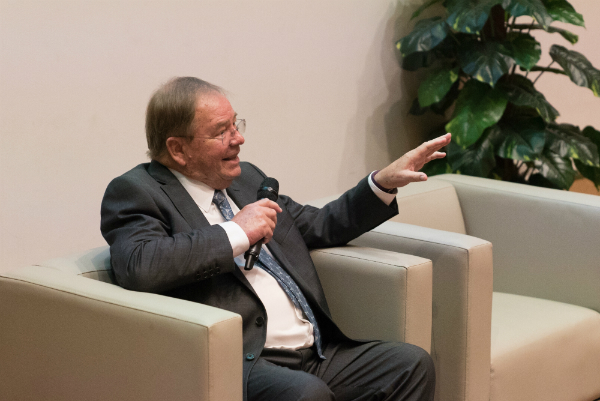 “By 2040, one in every 10 people in the world are going to have Type 2 diabetes. And those people, are frequently of the age where they’re most productive in our community. So this is enormously expensive for countries.”

He extolled the importance of introducing new technologies, adding that farmers are currently not producing enough staple food crops such as rice and wheat, to meet the challenge of 2050.

Dr Peacock also spoke about some of the novel technologies used, including on the topic of hybrids which tend to produce bigger grains and more produce than their non-hybrid varieties.

“About 100 years ago, maize geneticists introduced hybrids,” he said, adding that there were “terrific gains in productivity”.

“You can see hybrids are bigger than their parental plants and their production of grain is substantially better than in their parents.”

The talk was organised by Monash University Malaysia as part of the Sir John Monash Lecture, in partnership with the Jeffrey Cheah Distinguished Speakers Series. The Sir John Monash Lectures engages high-profile thought leaders in the spheres of policy-making, corporate and academia to address key issues pertinent to stakeholders around the region.