The role of ICT in alleviating poverty Professor Viswanath Venkatesh expounding on the role of ICT in achieving the UN Millennium Development Goals.

Introducing the Internet and computer technology to very poor communities will not improve their conditions if the technology - usually designed for the world’s literate, higher income population - is not easily understood and therefore not used by the aforementioned communities.

This was the conclusion that Professor Viswanath Venkatesh, a Distinguished Professor and Billingsley Chair in Information Systems at the Walton College of Business, University of Arkansas, delivered to his audience in his presentation 'Pursuing the United Nations Millennium Development Goals: Lessons Learnt From Villages in a Developing Country'.

In the fourth installment of The Sir John Monash Lecture on 30 July, Prof Viswanath presented his on-going research on 10 villages in India since 2004, as well as their adjacent ‘control group’ villages, and whether an information and communications technology (ICT) intervention brought any positive changes in relation to the United Nations Millennium Development Goals (MDGs).

Prof Viswanath found that after re-visiting poor Indian villages that had a computer room and Internet connection installed, most villagers were hardly aware of the presence of this technology, much less utilising it. He found that there was a 90% failure rate, with these computers gathering dust and some of the rooms becoming storerooms instead.

“We think that all we need to do is build something, and the people will come - but it does not work,” he pointed out, adding that in abject poverty where computer literacy was zero and access to water and electricity was limited, no one would use a computer. “It’s easy for companies to throw money at the problem, without addressing the root issue.”

To get around this situation, Prof Viswanath and his team allocated a staff to man the ICT kiosk in order to facilitate the use of the ICT (proxy use) for any community member that needed information on farming methods, childbirth, symptoms of diseases and such. And while he noted that usage did increase, though not very significantly, the information gained was also disseminated throughout the village thanks to these rural communities’ social networks and tendency to spread information by word-of-mouth. 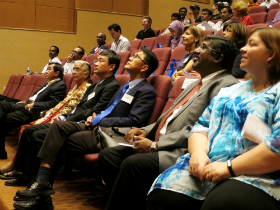 “These cultures are far more collectivist, so there is an oral tradition of transmitting information,” he said, adding that the social networks were both an ally and a hindrance. “So even if there isn’t a large number of people using ICT, the social networks help to diffuse the information. On the other hand, it can be also a hindrance because you might be ostracised if you try to break away from the cultural norms and traditions.”

The intention of this project was to use technology and the villages’ social networks to modify behaviour and encourage new ways of generating income and entrepreneurship, as well as lower mortality rate.

Prof Viswanath found that after 8 years, the 10 villages recorded a 66% growth in income as opposed to the 30% growth in the adjacent ‘control’ villages that had no ICT intervention. Also, the mortality rates declined from 70 deaths per every 1000 births, to roughly 40-50 deaths, a rate that is lower than the control group. Other spin-off effects included an emergence of women who started small businesses and sent their children to schools with their extra income, as well as entrepreneurs who delved into technologies such as Skype for communication.

As Prof Viswanath expounded on the lessons from his research, he noted that ICT intervention would work well with the presence of several factors, such as complementary investments in regards to roads, mobile clinics, as well as access to clean water and electricity. “It is of no use if you read on the Internet that ‘if you see such symptoms, see a doctor’ when there is no doctor around, and no accessible roads,” said Prof Viswanath.

He believed that companies should sponsor the technology, and governments should be in charge of the management and execution of the ICT intervention.

In order to replicate this on a large scale, Prof Viswanath concluded that technology must be designed for poor illiterate communities to enable them to use it on their own. “We need to forget all we know about applications and technological design in order to design for this group of people,” he said. “We will not be able to provide ICT to all villages in India or staff all the kiosks, we’re hoping to look towards a ‘bottom-of-the-pyramid’ technological design so that we will not need to be resource-intensive.”