Studying the therapeutic effects of snake venom on cancer cells 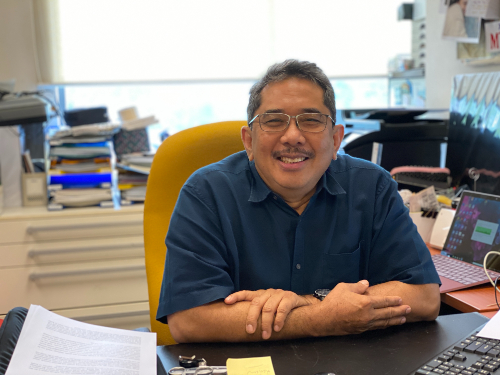 Cancer is among the leading causes of death worldwide that affects both men and women. This global health phenomenon is not only costly to treat but often involves a combination of treatments that can have adverse side effects on patients.

Professor Iekhsan Othman, a lecturer at the Jeffrey Cheah School of Medicine and Health Sciences (JCSMHS), Monash University Malaysia, whose fascination with snakes goes back to 40 years, is now at the centre of a study to determine the efficacy of snake venom for cancer treatment.

Although the very thought of snake venom is enough to strike fear into anyone, very little is often said about its healing properties.

“Back in the days, snake venoms were used as coagulants to prevent blood clots during surgery,” said Prof Iekhsan.

The drug, Ancrod (Arvin) which was widely used during surgeries in the 1970s and 1980s to prevent blood clots, was purified from the snake venom of the Malayan pit viper, Callaselloma rhodostoma. The drug was used as an alternative to heparin (anticoagulation for cardiopulmonary bypass).

“We need to identify the components of the venom that are harmful and useful in order to use them as therapeutic agents. The toxic and non-toxic components must be studied for a better understanding of their biological activities. That’s the fundamental research question,” he added.

Professor Iekhsan has worked on snake venoms from various countries such as Australia, Africa and Europe during his doctoral thesis. He began his work on Malaysian snakes upon becoming an academic and researcher in University Malaya in 1983. A trained neurochemist and neurotoxicologist, Professor Iekhsan laments the lack of expertise in Malaysia to conduct research on the benefits of snake venom.

“When I started my research some 30 years ago, there wasn’t anyone with the research capability to look into snake venom effects and how they block the nervous system. As a neurochemist, I focused on the nervous system - centrally in the brain or the peripheral areas throughout the body. I started working on identifying and categorising all the components of venomous Malaysian snakes. Somebody had to do it. If we (Malaysians) don’t work on our snakes, then who will?” he asks.

Snake venom research is one of the more difficult ones around. There are multiple processes involved right from the beginning - from the milking of the venom to the applications of the purified venom proteins on various cancer cell lines. The screening process is rigorous and costly, different snake venoms have to be matched with the respective cancer cell lines.

Professor Iekhsan and his team regularly make their trips up north to a snake farm in Perlis where they collect snake venoms. Most of the snakes are found at paddy fields, rubber estates and oil palm plantations.

“We make arrangements with locals who can milk the venoms for us. We try and conduct our milking process as frequently as possible since the amount of venom obtained from each snake is very little. Furthermore, we need to ensure the survival of the snakes for subsequent milking. Our students are never allowed to milk the venom. It is far too risky to expose them to such danger,” assures Prof Iekhsan.

One has to be very careful when handling snakes. Mistakes can lead to death. Venoms from different snakes have different levels of toxicity and potency.

Professor Iekhsan credits the support and provision of updated research facilities at Monash University Malaysia that enables such complex studies to be carried out. This includes the setting up of a complete chromatography facility together with the LCMSMS platform (Liquid chromatography mass spectrometry mass spectrometry) at JCSMHS, in which he is the Director.

“This fantastic LC-MS/MS platform facilitates the identification and analysis of every protein component present in the snake venom. The machine is costly, and Monash University Malaysia’s investment in providing a high-end facility for research has enabled our studies to be published in high impact factor and top journals,” he added.

There are more than 20 different types of proteins present in every species of snake venom. Upon characterisations of these proteins, the components will be tested on various cancer cell lines available in the laboratory to identify proteins that may have anti-cancer properties.

Among the key constituents of the snake venom identified are the L-amino acid oxidase (LAAO), phospholipase A2 neurotoxins, and nerve growth factor which have been subjected for cancer studies, due to their potency in stemming the tide of tumours.

The research indicates that LAAO from the Malayan and Mangrove pit viper contains molecules that can kill cancer cells. The L-amino acid oxidase isolated from the venom of these snakes has anti-colon cancer properties.

“One day, we hope to use this to treat cancer in humans. We need to do a lot more testing. The objective is to find an agent that can substitute chemotherapy. In chemotherapy, particular drugs synthesised by pharmaceutical companies are used, and the side effects of these drugs are well-publicised. We are trying to find a natural source to see if components from snakes can substitute chemotherapy drugs with minimal side effects,” says Professor Iekhsan.

For an educational institution as illustrious as Monash University Malaysia, industrial collaborations form the backbone of research and job opportunities. Professor Iekhsan works with some of the best minds in the world. One of his collaborations is with Professor Wayne Hodgson, Deputy Dean (Education) in the Faculty of Medicine, Nursing and Health Sciences at Monash University (Australia) and a Professor of Pharmacology. “We share our expertise and we co-supervise our students,” explains Professor Iekhsan.

“The whole idea is that whenever there is a snake bite, the patient should be saved. It starts by determining the species of the snake responsible (if possible, by bringing in the snake, preferably dead, to the hospital) and then determining which antivenom that is most appropriate to be given to the patient. We have antivenom for many species of local snakes, which were purchased from various sources. We buy antivenoms from Taiwan, India and Indonesia. However, the most effective antivenoms are those from Thailand’s Queen Saovabha Memorial Institute and the Thailand Red Cross,” he added.

Dr Syafiq Asnawi Zainal Abidin, who completed his PhD under the supervision of Professor Iekhsan Othman, Associate Professor Rakesh Naidu and Professor Pathmanathan, says he fell in love with snake venom research despite knowing very little about it in the beginning.

“To be honest, when I first started, I had no idea what kind of role snake venoms played. Professor Iekhsan encouraged me to read up on snake venoms. We found out that they had a lot of therapeutic potential. From there-on, we worked together by carrying out basic screening for anti-cancer activities with Associate Professor Rakesh Naidu and Professor Pathmanathan. I have now developed a strong love for snakes. It was one of the best experiences of my life because I have always wanted to work on cancer research since I was a kid,” he enthused.