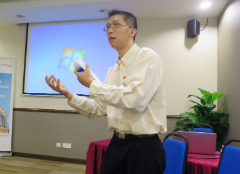 The first instalment of Pecha Kucha saw three academics present topics from their individual fields within a limited time frame. Head of School of Arts and Social Sciences Professor Kuah moderated the session.

Kicking things off was Associate Professor Edwin Tan Chee Pin, Discipline Head (Mechatronics) from the School of Engineering. He spoke about the observer, a typically computer-implemented system. The system provides an estimate of the internal state of a real system - from measurements of the input and output of the real system, and their applications. He explained how observer research can be used across various fields, to help in solving certain challenges such as cost and physical constraints.

“However, there are challenges to observer research. The main one being, reliability. Research depends on the model, and most times, the model is never fully accurate. These could cause inaccurate estimates or false alarms,” he noted.

Prof Tan went on to highlight some uses of the observer in both engineering and non-engineering domains. Some of the examples he showed include how it is used to estimate measurement in TCP-IP congestion control, detect and identify locations of fault in power transmission lines and estimate the yaw movement in detecting the oversteer/understeer in vehicles. On the non-engineering front, it is used to estimate or predict various data in areas of finance, medicine, transport and bio-processes, among others. 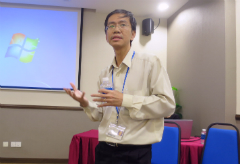 The second speaker was School of Pharmacy’s Associate Professor Ong Chin Eng, who discussed the topic of metabolism-based drug interaction. He specifically touched on why certain drugs do not mix well in our body, as he described the journey of a drug in our body, highlighting the Pharmacokinetic processes.

“The drug given would be absorbed at the site of administration, distributed to the site of action, but eventually the drug would need to metabolised and excreted from the body. There are more than 100 enzymes involved in drug metabolism in the liver, the most important being Cytochrome P450 (CYP). Different members of this enzyme are collectively involved in the clearance of 70% to 80% of clinically used drugs,” he said.

He explained that during this process of collectively metabolising the drug, the enzymes are implicated with ‘drug-drug interaction’. This interaction can alter the way drugs act in the body, or cause side effects. Prof Ong said his research focus has been on developing in vitro approaches to studying enzyme activity using test tubes and to ultimately terminate reaction and metabolise the drug. The final speaker, Associate Professor Quek Kia Fatt from the Jeffrey Cheah School of Medicine and Health Sciences, spoke about Statistical Pitfalls in Medical Research. He presented an overview of statistics as a powerful tool in the scientific research process. However he noted that much of the published medical research contains errors and shortcomings.

Prof Quek concluded the session referencing a Swiss Medical Weekly review, “the standards in the use of statistics in medical research are generally low. And there are a number of literature pointing to persistent statistical mistakes flaws and deficiencies in most medical journals.”

PechaKucha, which means ‘chit chat’ in Japanese, held once a month, is a series of lunchtime talks organised by the Professors Advisory Group (PAG) that feature a certain number of speakers each time. The concise and fast-paced talks introduces the audience to a range of disciplinary areas covered by Monash University Malaysia’s academics.