Take a closer look before endorsing the TPPA, warns economist

With the promise of major economic benefits such as increased GDP for Malaysia by US$107bil (RM454bil) to US$211bil (RM819bil) from 2018 to 2027, and investments estimated to rise by US$136bil (RM528bil) to US$239bil (RM927bil) over the same period, Malaysia’s decision to sign the Trans-Pacific Partnership Agreement in February looks like a step in the right direction.

However, economist Jomo Kwame Sundaram, who was a guest speaker at the Sir John Monash Lecture recently, warns the public not get carried away with the TPPA’s projected benefits without first considering the costs, as there are major adverse implications for the country. 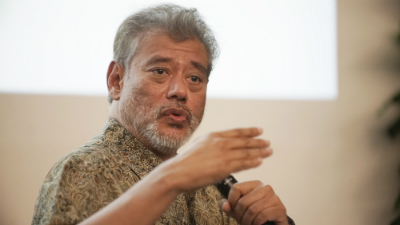 Jomo, who has worked for the United Nations in areas of economic development and international financial systems, believes that the projected gains are “grossly exaggerated” and that costs are downplayed.

He explains that advocates of the TPPA utilise two studies by the US-based Peterson Institute of International Economics. The problem lies within the studies’ methodology of computable general equilibrium (CGE) models, which are controversial because problematic assumptions are made before calculations are tabulated, such as full employment and no changes in each country’s trade or fiscal balances.

“Certain assumptions prevent you from looking at certain aspects. Prospect of job losses is assumed away with the full employment assumption. Provisions (under the TPPA) to extend intellectual property rights are modelled as cost reductions, increasing trade in services. Provisions allowing foreign investors to sue governments in private tribunals or to undermine national bank regulation are considered cost reductions that promote trade,” he said.

Other signatories of the TPPA include the United States, New Zealand, Australia, Chile, Mexico, Japan, Peru, Canada, Vietnam, Singapore and Brunei. The TPPA represents close to 40% of GDP worth US$30tril (RM116.4tril).

More than 90% of overall growth gains are due to non-trade measures and are not-trade related, he said, adding that net trade gains resulting from the TPPA are modest. “The only official US government study of the likely effects of the TPPA found total growth of 0.1% after 10 years. The 2016 Peterson Institute study say the TPPA will bring total additional growth of 0.5% over 15 years, averaging 0.03% per annum on average. The projected trade benefits will take a decade to realise, although costs and risks will be immediate. They are one-time gains and have no recurring annual benefit,” said Jomo, who is currently the Tun Hussein Onn Chair in International Studies at Institute of Strategic and International Studies Malaysia.

Using the United Nations Global Policy Model and the Peterson Institute’s 2014 estimates of trade-related gains, together with more realistic assumptions, Jomo found that the TPPA would lead to net employment losses in many countries, higher inequality in all country groupings, and increased pressures on labour incomes.

The TPPA interferes with how governments operate far more than is needed to facilitate trade, said Jomo, referring to the legal amendments that governments need to make to comply with the TPPA. This translates into 26 amendments to 17 laws in Malaysia, which mostly concern rules of origin, intellectual property and labour laws. “Participating countries are obliged to follow the provisions of the TPPA even when in conflict with national or public interest. Don’t get locked into agreements that have negative effects when conditions change in future,” he said. 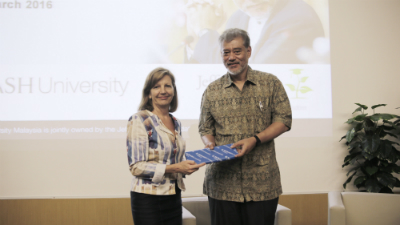 “It would be better for Malaysia to stay away from the TPPA to take a more prudent and pragmatic approach, with long-term national development objectives in mind. We still have two years (until the ratification deadline) to look at the TPPA more carefully, to have a more balanced and open debate, than has been the case so far,” he says.

The talk was organised by Monash University Malaysia as part of the Sir John Monash Lecture, in partnership with the Jeffrey Cheah Distinguished Speakers Series. The Sir John Monash Lectures engages high-profile thought leaders in the spheres of policymaking, corporate and academia to address key issues pertinent to stakeholders around the region.