An afternoon of science and silver linings In the fourth instalment of the PechaKucha for 2015, three academics shared scientific insights on topics of interest.

According to Associate Professor Alexandre Schaefer from the School of Business, interest in the field of neuroscience to understand consumer behaviour (CB) is growing. The analysis of brain electrical activity enables the measurement and understanding of brain responses.

“Science can do a lot of things for CB research,” said Assoc. Prof Schaefer. Neuroscience provides an insight into how consumers make decisions. He explained this through some examples which showed that emotions definitely play a role in the decision process.

Assoc. Prof Schaefer also introduced the NeuroBusiness Behavioural Lab, inviting academics to use the lab to aid in their research. Professor Chow presenting on 'Why and how cells die and its impact on health and diseases'.

In the last 20 years, cell biologists have been fascinated by the meaning of death. “Every second, a million cells in our body dies. 80 billion cells die in a day. Should we be afraid of that? No, because it’s a good thing that they die,” stated Professor Chow Sek Chuen, from the School of Science, who was the next speaker.

He explained on apoptosis, a regulated cell suicide process known as programmed cell death (PCD). There are several reasons why cells die. Cells infected with bacteria, parasites and viruses need to die to try and prevent the spread of infections to other tissue areas.

There are times, the death process goes wrong, like in cancer cells. In talking about Alzheimer’s disease, Prof Chow said the brain cells die prematurely, and that the PCD is switched on too early.

Over the years, more than 50 types of diseases associated with apoptosis have been identified. 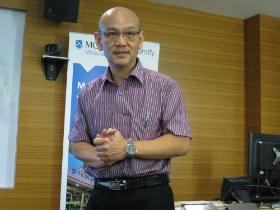 ‘Medicine in the cloud - the silver lining’ was presented by a founding member of the Jeffrey Cheah School of Medicine and Health Sciences (JCSMHS), Associate Professor Wong Chee Piau. His discussion centred on the sustainability of healthcare and how research showed that healthcare expenditure, over the last 50 years has tripled.

He elaborated on telemedicine, which is the use of telecommunication and information technology, to provide clinical health care remotely.

Assoc. Prof Wong and his team are currently working with various government agencies to establish an ecosystem for telemedicine in Malaysia, and to create a centralised patient record nationwide. He also presented a video showcasing an active video game based on virtual rehabilitation.