They are often referred to as creatures of the night - linked to vampires in European folklore - and were misleadingly associated with the spread of COVID-19 last year. Because of their nocturnal lifestyles and cave-dwelling tendencies, bats are among the world's most misunderstood animals. They often receive negative attention and Halloween associations in modern media. But while these flying mammals are predominantly associated with death and darkness in the West, they have historically enjoyed a more diverse representation in many parts of the East; where they have come to be associated with a wide range of cultures, folklore, and customs that are largely positive in nature.

The team studied 60 different cultures from 24 countries across the region, analysing citations of key articles, websites, local knowledge and information from those working on bat-related research. They discovered 119 bat cultural values, with more than 60 per cent having only positive values and only 10 per cent having negative values. The findings imply that the Asia-Pacific region and its customs contain far more positive correlations with bats, which may translate into opportunities for human-bat coexistence. 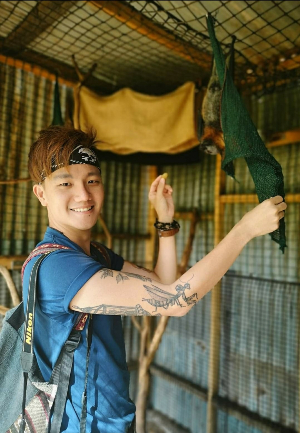 For instance, among Chinese communities, bats are known to represent beneficial qualities such as health, prosperity, and long life. The pronunciation of the word "bat" in Chinese (蝠) is "fú" - which is a homonym to the Chinese word for "blessing" (福) - directly associating the bat with good luck and blessings. They are popular motifs in artwork among Malaysian and Indonesian cultures, and bat-inspired patterns can be found in both batik, songket and pua kumbu. The popular Malay folk dance, Zapin, also has steps that symbolise humility, which draws inspiration from the flying fox's (a large fruit bat) elbow. In some parts of India, they are even considered divine animals with ties to the deities Muni, Kali, and Lakshmi.

Positive representations of bats are similarly abundant among indigenous communities of the Asia-Pacific. For the Ibans of Borneo, bats are considered the spiritual messengers of respected shamans, and a bat flying into one's home is interpreted as the arrival of a shaman bringing good vibes. Among the Samoans, the flying fox is painted as a heroic saviour in mythology, having played a role in the rescue of the Tongan king's wife.

"I have always been fascinated by bats as the only mammals to have ever evolved the ability to fly. And I like to imagine that this was a fascination that our ancestors shared. I think that this collaborative research is a wonderful opportunity for us to remind people of how amazing bats are and the historical role they have played in shaping the cultural fabric of this region," says Dr Cyren Wong Zhi Hoong of Monash University Malaysia.

Cultural expressions are closely tied to the communities' interactions with animals and their habitats. According to the research team, habitat destruction and species extinctions are likely to impact communities' social memory and ethnobiological information delivery. The team's literature review renders a clear indication for a rich collection of socio-cultural representations of bats across the Asia-Pacific region. They were able to help correct and supply additional information in the literature, emphasising the significance of local involvement and leadership in ethnobiological research and the need for more locally spearheaded documentation efforts.

"As bat conservationists, we were thrilled to discover the wealth of positive stories and symbols related to bats, especially those in Malaysian cultures, as these accounts rarely penetrate mainstream media. We are hopeful that this publication will help more Malaysians realise the positive impact that bats have had on our ancestors' lives and will spur further efforts to document cultural accounts and traditions related to bats in the region," shares lead investigator, Mary-Ruth Low, Senior Conservation Scientist under Project Pteropus, Rimba.

The full article is available as open access in the latest special issue on the Ethnobiology of Bats by the Journal of Ethnobiology.