The fifth instalment of PechaKucha for 2015, showcased three academics who shared insights on their topics of interest.

“We have to rethink about merely looking at market structure, instead, we should also look at clusters,” said Associate Professor Brian Low Koon Huat from the School of Business when explaining about the changing landscape of business-to-business (B2B) today.

According to him, cluster analysis enables one to target customers according to their needs, instead of taking the general marketing approach. Assoc. Prof Low also spoke on how to build legitimacy strategies, among them, by having a new contextual perspective.

“The Internet changes everything. It changes in the way customers connect with the market,” he said. Customers these days are giving and receiving recommendations from peers as well as experts through social media among other online channels.

In his conclusion, he said it is crucial to better understand the development and evolution of patterns in how a B2B social network develops.

“To cut, or not to cut, that is the question.” This was the premise to Associate Professor Dr Suneet Sood’s session on gallstones. 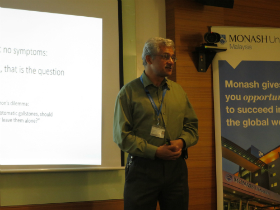 Associate Professor Dr Suneet Sood presenting on 'Gallstones but no symptoms. To cut or not to cut, that is the question'.

“If a gallstone forms in the gallbladder, a patient may feel the pain. When pain is felt, surgery is mandatory. But what if they don’t experience any pain? These gallstones with no symptoms or complications are called asymptomatic gallstones,” shared Dr Suneet.

Surgeons are faced with a dilemma when patients have asymptomatic gallstones, rethinking if surgery is required or not. According to Dr Suneet, some surgeons may suggest surgery.

He shared that through his research, gallstones feature more commonly in females, and as such if a male has asymptomatic gallstones, he is best left alone, as only about five per cent of asymptomatic males will ever develop pain.

His talk draws focus on non-communicable diseases, and how we are affected by the people around us, in a physical social setting. Obesity was just one of the examples given. Other social network influences are smoking, drug use, alcohol consumption and political mobilisation.